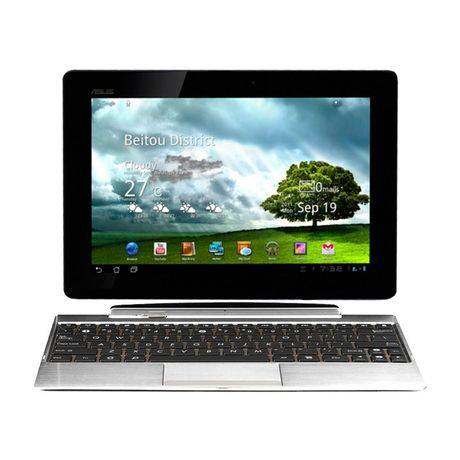 Do you love the ASUS Eee Pad Transformer Prime, but want something a little down-market? Do you live in or around France? The head on over to the Tablette Store and say, “Je veux le bleu, s’il vous plaît.” The ASUS Transformer Pad 300 (minus the “Eee” branding, finally) has just gone up for pre-order. The 32GB version is set at  €499, or about $650. ASUS mentioned a cheaper 16GB alternative when it debuted the 10-inch tablet at Mobile World Congress, but there’s no sign of it today – though the retailer says that the tablet will be available on May 15th. Presumably the price is for the tablet alone, though the keyboard dock is pictured.

The Transformer Pad 300 is an updated version of the original Transformer, complete with docking keyboard and Tegra 3 processor. This one’s clocked lower than the one of the Transformer Prime at 1Ghz. You still get Ice Cream Sandwich and a 1280×800 LCD screen, but the tablet’s construction has switched to a sturdy plastic to avoid the WiFi and signal issues of the Transformer Prime. You can have it in any color you like – so long as you like red, blue or white.

The version going on sale in France is WiFi-only, and thus will have NVIDIA’s Tegra 3 instead of a Snapdragon 4 found on forthcoming LTE versions (France doesn’t have any LTE-capable networks, to my knowledge). Consider this one suspect for the moment – retailers have been known to speculate on release dates to get pre-orders. ASUS hasn’t given any indication of when the 300 (or its more high-end brother the Transformer Pad 700) will be coming out, but the summer seems like a safe bet. ASUS tends to have fairly close worldwide releases, so other countries in Europe, Asia and the Americas should be seeing it around the same time.