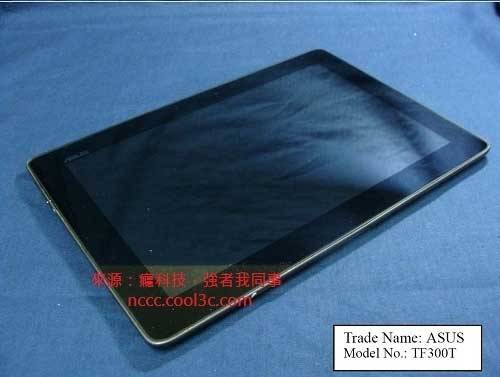 ASUS recently launched their Transformer Prime TF201 Android tablet, and are set to release a budget 7″ slate later in Q2. New leaks today however have us wondering if we’ll be seeing a third slate from them this year. New images of what is being called the ASUS TF300T have leaked. Is ASUS preparing a new Eee Pad Transformer to replace the original, and be priced under the Prime? More details below.

This new TF300T is shown next to a certification document with a time stamp of January 19th 2012, which might mean this tablet could be revealed in the coming weeks or months — possible at Mobile World Congress in Spain. The image below you can clearly see it has been labeled the TF300T but we are still searching for more details on this slate. Most likely it will feature a quad-core processor like the NVIDIA Tegra 3 but we have no details and can’t confirm at this time.

What’s interesting here is the design. The radial spun rounded design is similar to the new Prime, yet the weird textured back closely resembles the original Transformer. Making us wonder if this will sit nicely between the two to complete the ASUS tablet lineup. One important note is the rear does seem to possibly be ABS plastic like the original, and not aluminum like the Prime — although I’m not digging that goofy reddish color myself.

There is the possibility this plastic coated back is a sign that the TF300T could be their first 3G/4G equipped tablet that will sit under the Prime in terms of specs, yet offer wireless connectivity for those needing more than WiFi. Stay tuned as I’m sure we’ll be hearing more soon.