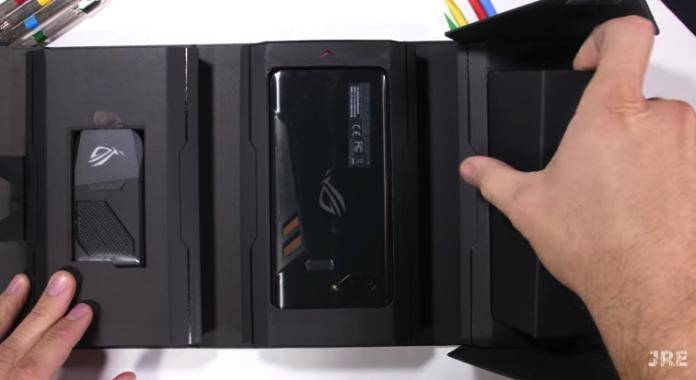 The ASUS ROG Phone is the mobile gaming phone you deserve. We’ve been saying that since it was introduced back in June. We can agree overkill has a name and it’s the ASUS ROG gaming phone. Different variants are available with mobile gaming accessories ready to blow your mind. The device has started to ship in the United States and we know a lot of people who already have received their units. ASUS’ Republic of Gamers line is certainly for any geeky gamer looking for something new.

The phone has reached JerryRigEverything. It’s been scratched, burned, and bent. We hate the idea of getting rough with such an expensive gadget that goes from $899.99 up to $1,099.99.

At first glance, the phone looks very robust–ready for rough and rugged use. ASUS knows how avid gamers can get really rough and intense with some games.

The phone looks futuristic, starting with a weird box and mostly glass design. We like the built-in exterior heatsink plus those spreaders and vents as described.

As with most phones with Gorilla Glass 5 display, this one scratches at level 6 and deeper grooves at level 7. ASUS has used a combination of plastic, metal, and glass for the phone’s build.

The AMOLED panel goes white after 32 seconds of heat. Sadly, it doesn’t recover. As for the bend test, the phone isn’t damaged except for a little bend.