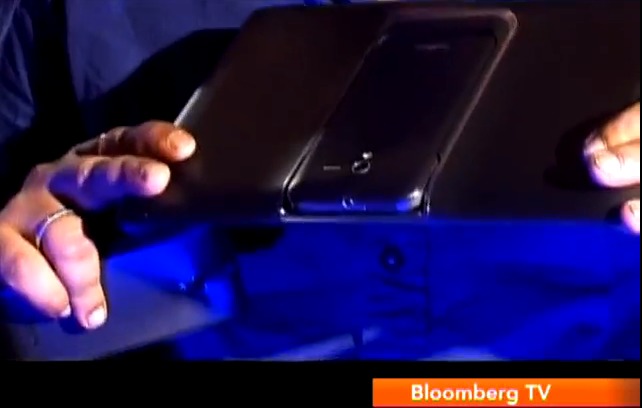 Today the folks at Bloomberg were lucky enough to get what appears to be the first video and hands-on with the new ASUS Padfone 2 smartphone and tablet convertible. The device hasn’t leaked yet much, but the official announcement is set for October 16th. Today however we’re seeing this newer device with a 4.7-inch display, 13 megapixel camera, and the new design for docking right into the tablet.

The video is rather brief and quite small, so we don’t get a really good or thorough look at the device — but this is the first I’ve seen of it. Overall the aesthetics are almost identical to the first generation Padfone 2 only they’ve added a few changes. Instead of having a dock door, the phone now slides directly into the back of the tablet as you can see from the images and video provided. Not only that but just like the earlier leaks we’ve confirmed a few specs. (skip to 1:40 in video for Padfone 2)

The device is still be a 10-inch tablet running Android 4.0 Ice Cream Sandwich (or Jelly Bean) and come with a beautiful IPS display, but all the internals are in the smartphone — just like the original. We have a 4.7-inch IPS HD display 1280x720p on the new phone, and overall it looks almost the same as the original. In the video above the ASUS CEO confirms a 13 megapixel camera on the rear as well.

The new design makes the phone more accessible, the camera easier to use, and you won’t need to deal with that clunky phone cover door for docking as before. Whether this design and device will be something popular, or still just a niche product remains to be seen. The world will know all the details come October 16th so stay tuned for more information. Thoughts on the Padfone 2?