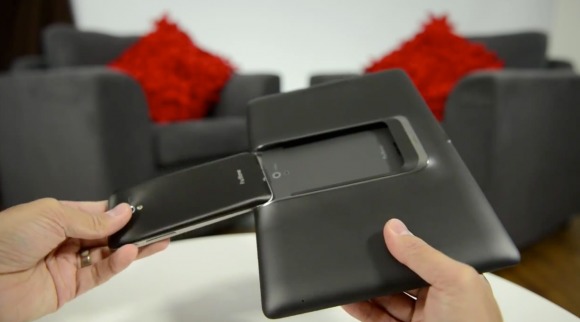 ASUS is getting ready to roll out the sequel to its tablet-in-phone, aptly named the PadFone 2. ASUS originally announced it for a Taiwanese release, but later said it was coming to most of Asia and Europe. The PadFone 2 will feature a much better designed phone holder in the tablet that is designed to keep the phone held in place, even during violent shaking and movements. After all, no one wants the phone to fall out while going GANGNAM STYLE.

The PadFone 2 has some solid specs that should make potential buyers happy. It has a 4.7-inch Super IPS+ 720p screen, a 13-megapixel rear camera and a 1.2 megapixel front-facing camera for those chat sessions. The camera can record 720p video at 60 frames-per-second and 1080p video at a solid 30 FPS. For processing power, it has a quad-core APQ8064 Qualcomm processor.

The device also has 2GB of RAM, Corning Fit Glass, and NFC. It features a fixed 2,140 mAh battery and, sadly, it has no microSD slot for expandable memory, instead, ASUS gives buyers 50GB of WebStorage. It comes with ICS installed, but ASUS says a Jelly Bean upgrade is coming shortly. The tablet portion features a 5,000 mAh battery, measures 10.1 inches, and weighs 514 grams (without the phone plugged in).

The PadFone 2 will roll out in Europe (Bulgaria, Denmark, Finland, Germany, Hungary, Italy, Poland, Portugal, Romania, Spain, Sweden) and Asia (Hong Kong, India, Japan, Malaysia, Singapore, Taiwan, Thailand, U.A.E) before the end of this year. It will launch in other countries sometime after that. The device will sell for €799 for the 32GB model with another €100 getting you up to 64GB of storage. Those prices are for the phone and the tablet dock.