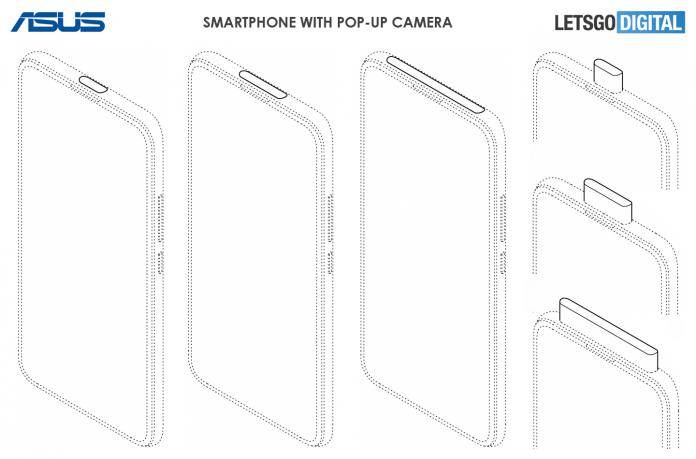 While a lot of the smartphones released this year have notches, not everyone actually likes it as it can sometimes look aesthetically unpleasant. OEMs are now trying to figure out a way to make the notch smaller and have as much screen estate as they can. One option would be to have mechanical pop-up cameras and based on a new patent discovered, ASUS seems to be the newest brand that may possibly try to apply that tech to their upcoming smartphones.

The patents were filed with the European Union Intellectual Property Office and published by the Let’s Go Digital website. Based on the patents, ASUS may be working on a smartphone that may have a pop-up module for the camera or a display hole for the selfie camera. Although of course, as we know by now, not all patents eventually make it into actual products.

The patent shows three different sizes. The first one has a pop-up that is enough for just one camera while the second one is a bit wider and should be able to accommodate more than one module. The third one has a wider pop-up and they will be able to place multiple sensors as well as 3D Face recognition.

The second design seen in the patent has a camera hole at the top left corner of the display. It even has a thin earpiece grill on the tiny bezel at the top of the earpiece. This looks similar to what the Samsung Galaxy A8 and the Huawei Nova 4. Again, there is no assurance that we will actually see products out of these patents, but it’s still interesting to see what they may be working on.