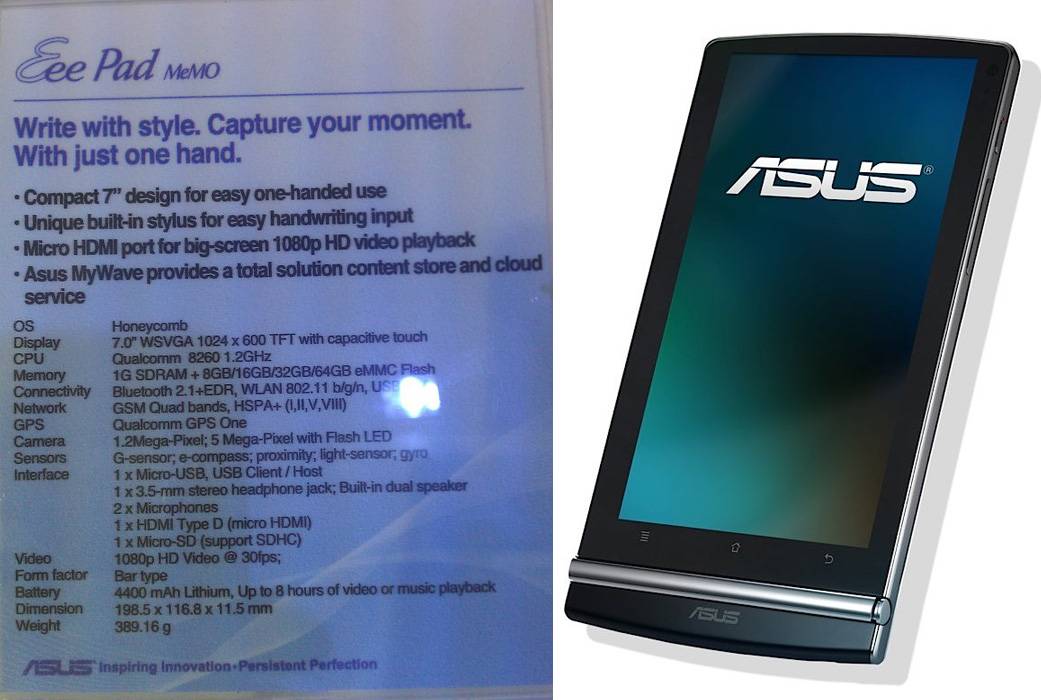 ASUS has confirmed that the Eee Pad MeMO will run Android 3.0 Honeycomb when it arrives later this year, with the 7-inch tablet taking on the HTC Flyer with its hybrid stylus/finger input. jkkmobile spotted the confirmation on an ASUS product sheet at CeBIT 2011 this week, along with confirmation of all the MeMO’s specs.

The tablet has a 1024 x 600 capacitive touchscreen, 1.2GHz Qualcomm MSM8260 processor, quadband HSPA+ support, WiFi b/g/n and Bluetooth 2.1+EDR. There’s also 1GB of RAM and between 8GB and 64GB of onboard storage, along with twin cameras – 5-megapixel with LED flash on the back, 1.2-megapixels up front – and a micro HDMI port.

Other connectivity includes microUSB with Host support, a 3.5mm headphone jack, microSDHC and a twin microphone array; there’s also a digital compass, gyroscope, g-sensor, proximity sensor and light sensor. ASUS reckons the Eee Pad MeMO is good for up to 8hrs video or music playback on a full charge.

Update: Honeycomb isn’t the only surprise ASUS has; jkkmobile has shot a video of the slate (still currently running Android 2.2) with its Bluetooth handset accessory, a remote-control that can be also used to answer calls, so you don’t need to hold the MeMO itself to your head. It also has a transparent screen. According to ASUS Germany, the Eee Pad MeMO is expected to retail for around €499 ($690) for the 8-16GB model, or €699 for the 32-64GB model, with the Bluetooth handset; that certainly undercuts the €669 Flyer at the low end.