ASUS recently unveiled the Chromebox, and based on a recent leak, it appears the company may be following up with a pair of Chromebooks. The details were spotted by VR-Zone and include mention of the Chromebook C200 and Chromebook C300. The details are rather light, however these are rumored to be sporting an 11.6 and 13-inch display respectively.

Another assumption is how these models will be powered by Intel processors. The report didn’t offer any suggestions in terms of processor specifics, but based on the ASUS Chromebox announcement — that does fit with the pattern. Looking back, ASUS detailed three processor options for the Chromebox. 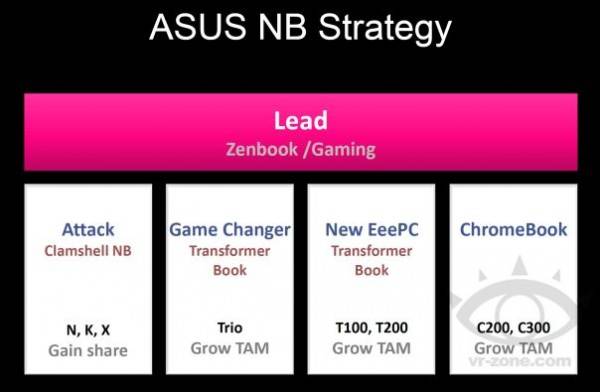 Those included a base model with an Intel Celeron 2955U, with options to step up with either an Intel Core I3 4010U or Intel Core i7 4600U. This isn’t necessarily an indication of what ASUS could do spec wise, but we often see display resolutions of 1366 x 768, along with 16GB worth of SSD storage, 100GB of Google Drive storage (free for two-years), and 2GB of RAM, with the rare bump to 4GB of RAM.

ASUS originally announced how they were planning to get into the Chrome OS space back in May of 2013 with an expectation about models coming later in the year. That timeline seems to have been missed, which sort of places ASUS in a position of playing catchup. We have already seen models from competitors to include HP and Toshiba as well as Samsung, Lenovo and Acer.