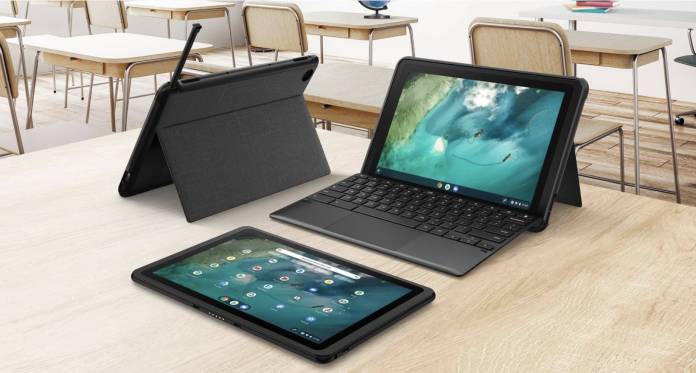 You would think that you don’t need a military-grade, sturdy device if you’re just going to be at home or in school but with kids these days, you never know. The new ASUS Chromebook Detachable CZ1 is trying to get into the school/student market by offering a pretty flexible tablet with a built-in stylus that should be able to meet educational requirements and also protection from drops, throws, and other shenanigans. Pricing and availability is still to be announced though.

Design-wise, the tablet was created to survive all the “knocks, bumps, and drops” that is the fate of a lot of mobile devices given to kids and teens. It has tough rubber trim on its edges and corners to absorb the impact of possible physical impact while its 3D-textured finish protects it from scratches and fingerprints. It also has a solid cover that serves as “an extra layer of defense” for those accidents. Overall it meets the US MIL-STD 810H standards to make it a rugged device.

The other main feature of the ASUS Chromebook Detachable CZ1 is that it comes with a built-in stylus that should automatically charge itself when “garaged” in the tablet. It also has a detachable keyboard cover with a trackpad with an ErgoLift design so you get an intuitive and comfortable experience. This and the detachable, free-angle stand cover can give users various modes like laptop, stand, or tablet. It has an 8MP main camera and a 2MP front-facing one which will not blow you out of the water but it should do its job.

As for the specs, it has a Full HD 10.1-inch multitouch display with a 1920×1200-pixel resolution and a 16.10 aspect ratio. It runs on MediaTek’s Kompanio 500 (MT8183) chipset with an octa-core processor with four Arm Cortex-AA73 performance cores and four A53 cores. It has either a 64GB eMMC or 128GB eMMC storage with 4GB LPDDR4X RAM. It comes with a 27Wh battery with 11-hours of battery life on a single charge. There is a single USB 2.0 Type-C port and a headphone jack.

Of course, the ASUS Chromebook Detachable CZ1 is powered by Chrome OS so all of the Google things can be found on the tablet including easy access to Google Play. There is no announcement yet regarding its pricing and availability but we’re sure to hear about it soon.