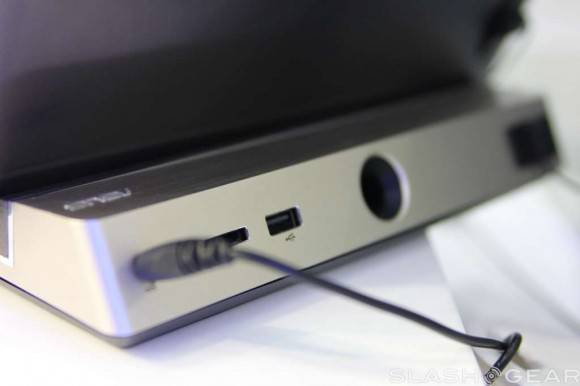 The folks from ASUS have just announced an awesome addition to their popular Transformer Pad family. Meet the all new ASUS Audio Dock. This new speaker dock will work with all of their tablets, and you’ll be enjoying classical, rock, or anything else you’d like in pure audio bliss thanks to Bang & Olufsen partnering to bring them some quality sound. No Beats audio here guys.

ASUS has just announced this new speaker dock at Computex 2012 and our team and sister site SlashGear was able to grab a few hands-on photos for your enjoyment. The new ASUS Audio Dock will work wonderfully with the ASUS Transformer Prime, the Transformer Pad TF300, as well as their upcoming Transformer 700 series. You can check out our full reviews and hands-on of each device in the timeline below. 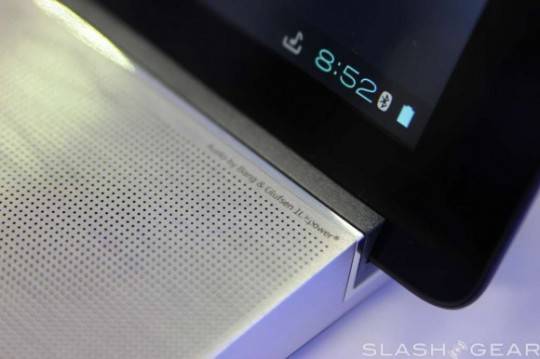 ASUS makes some of the best PC sound cards so this only makes sense to bring their technology to Android. What you get is not one, not two, but four 3watt speakers with ASUS SonicMaster Audio and Bang & Olufsen technology. The entire ASUS Audio Dock is wrapped in precision drilled brushed aluminum and is very sturdy. This device is 34.1mm tall, 140.4mm from front to back, and 220mm in length, so it could technically fit in a backpack although I’d sit it nicely on a shelf in my home personally.

For now the device isn’t final and doesn’t offer Bluetooth support, although ASUS did add a full sized USB port, as well as full size SD slot for extra storage and even more music options. It looks rather sleek and probably won’t offer portability and built-in battery options, but we won’t know until ASUS makes it official. This device looks quite sharp and I’d love to test one out. Would you buy the ASUS Audio Dock for enhanced audio with your tablet(s).