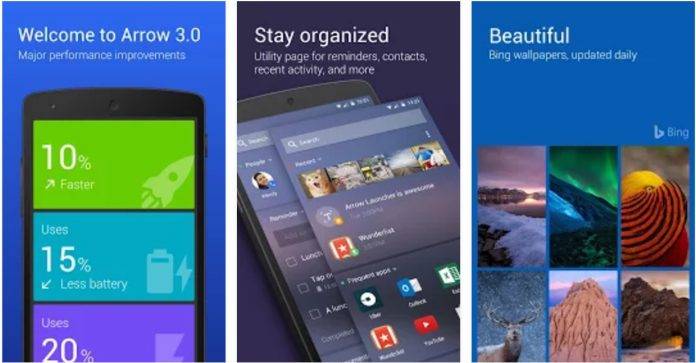 Arrow Launcher, a side project of Microsoft Garage’s experimental studios, is actually one of the best launchers that you can find out there in the wide world of launchers. Every update brings something new that will make it better of course and the latest one is no exception. One of their most requested features, tablet support, is now here, as well as other small but important things like a customizable utility page, more backup options, a new optional horizontal layout and carousel mode.

The new update is version 3.0 and has been in beta for some time, but now it is being released for all users of the launcher. Now you will be able to use the launcher on your Android tablet, which has probably been what was majorly missing all along. One major advantage of launchers is being able to customize your device according to what you want and need. This update brings even more options for you in this regard. If you want to show all the apps you have, you can now do it on a horizontal layout. You can also choose to hide headers and to use a carousel scrolling mode.

But probably the most customizable new feature for this update is a utility page where you can pin several cards, or rather the important apps and features that you want to have access to easily. You can pin contacts lists, reminders, apps you use frequently, etc. This is of course optional and how it looks is also customizable.

The changelog also mentions that it will have more Bing wallpapers and that you will have more backup and restore options. You can check the Arrow Launcher Google Play page to see if the update is already available for you.