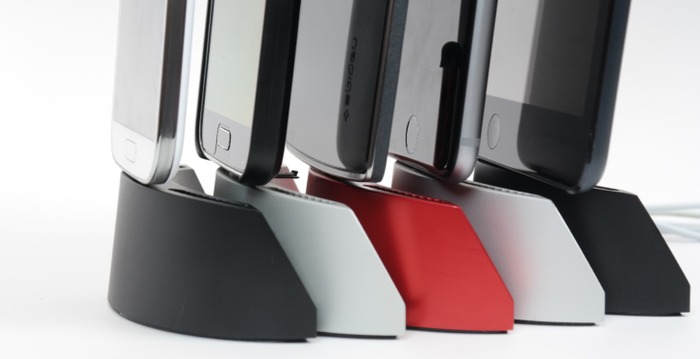 If you were one of those who backed the charging dock Arq Dock 1.0 and were pretty happy with it but wanted to see some improvements, well, then get ready to open your wallets again. Arq Dock 2.0 is now looking for more “investors” to bring you a much improved version of the original, and this time around, it has more options for your smartphones or slim tablets. It can support both Apple and Android devices and can be used as just a dock for cased and caseless devices or can be used as a charging stand as well.

The Arq Dock 2.0 is made from aluminum and comes with a micro USB cable among other components but is now built to support other cables as well, including USB 3.0, 30 pin, mini USB and of course, both kinds of lightning cables for Apple devices. You can adjust the connector height and the back support pins so you can use it with different devices like iPhones 4S, 5S, 6 and 6 Plus, iPad mini, iPad Air and iPad 4, plus other Android devices like the Samsung Galaxy S4, S5, Notes 2,3, and 4, plus the different Tabs (the slimmer ones though) as well.

Compared to the Arq Dock 1.0, this new product also has a similar shape and curvature, and also has the same pin support holes. Some differences between the two is that 2.0 is slightly taller and it has four cable grooves of different sizes and more cable tightening holes, since it can support more kinds of gadgets now. For those who have version 1, don’t worry, they won’t be useless as you can nest it with the newer Arq Dock now. It’s available in three colors: Aurora Black, Apolo Silver and Titan Red

The makers are still trying to raise funding for the Arq Dock 2.0 over on Kickstarter. It’s still around $3,500 short of its target of $12,000, but there are still 28 days to go for backers to sign up. If the first run is any indication, they will not have any problem reaching that goal. But the bigger question is, do you really need this stand/charger to add to your gadget accessories? (it does look pretty neat based on the the pictures on its page). If the answer is yes, you can pledge for as low as $22 (for 1 dock, US delivery, early bird backer) and for as high as $265 (10 docks, international delivery, main pledge backer).