The Archos 5 PMP was undoubtedly the star of the French company’s launch event yesterday, but they couldn’t help but tease with another new device.  The Archos Phone Tablet is, as the name suggests, a PMP/cellphone hybrid; in this case, it runs Android on a 1GHz ARM Cortex CPU, with integrated 3.5G for voice and data access.

According to the scant information Archos gave us, the Phone Tablet will have a smaller display than the Archos 5 – 4.3-inches versus 4.8-inches – but a slightly higher resolution of 854 x 480.  It will measure just 10mm thick, and we were also shown an image of the rear of the Phone Tablet that indicated a camera; there also appears to be a front-mounted camera, likely for video calls.

We’d also expect to see a fair chunk of flash storage in there – the Archos 5 packs up to 64GB – for media use.  Archos have been close-lipped on when exactly we might expect to see the Phone Tablet arrive, but we’ll not argue with another Android-based smartphone. 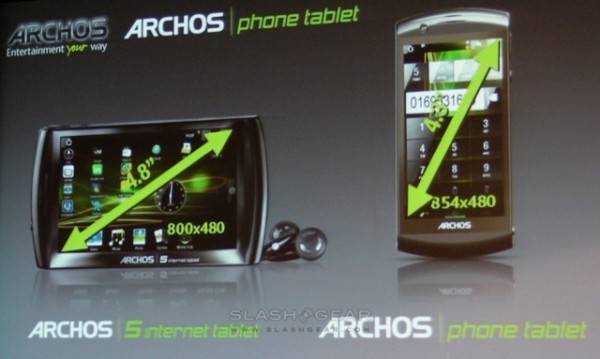