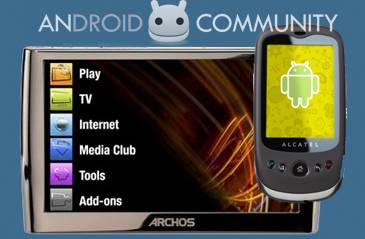 Alcatel One is pairing up with tablet maker Archos to bundle  Android smartphones with their Android based tablet computers.  The offer will be available to all telecom operators in the US and Europe. Utilizing Alcatel’s “One Touch Connect” feature that takes advantage of what looks to be a trend of offering a single subscription to cover both devices, One Touch Connect allows users to share the 3G connection under the WiFi hotspot feature in Android 2.2 (Froyo).

Archos had led the charge in mobile computing and enterainment since their first MP3 players debuted in 1988, so it makes sense that they would be on the forefront in pairing mobile devices together.  And the ability to share a single subscription, rather than being bogged down in multiple internet data plans is very attractive and represents the public’s desire to share their data plan, not duplicate it.  Demonstrations will take place during the Mobile World Congress in Barcelona at Alcatel’s One Touch Booth starting Monday and running through February 17th.

Press Release
February 8th, 2011
ARCHOS and ALCATEL ONE TOUCH announce a partnership bundling a
smartphone with a tablet
ALCATEL ONE TOUCH has partnered with the French manufacturer ARCHOS, leader in the
Android-based internet tablet market, to offer a tablet bundled with an Android smart
phone. This offer is open to all telecom operators in Europe and the United States.
The proposition fits with the recently unveiled strategy of telecom operators to offer a single
subscription for multiple connected devices by mid 2011. Using the ‘’One Touch Connect’’
feature, this bundle lets users share the 3G connection of their smartphone with their
ARCHOS internet tablet via the built in WiFi hotspot available in android version 2.2 (Froyo).
Demonstrations will take place at the ALCATEL ONE TOUCH booth – AV06 – during Mobile
World Congress in Barcelona from 14th to 17th of February 2011. During the fair, TCL
Communication will also be revealing its new brand identity through ALCATEL ONE TOUCH.

The objective of this new identity is to show the strong connection to the customers, and
communicate this through a new brand expression together with better design and smarter
products.

About ARCHOS
ARCHOS introduced the hard-drive-based MP3 player with the Jukebox 6000 in 2000, and
since that time has revolutionized consumer electronics devices. The company introduced
the portable video player in 2003 and was the first to bring TV recording, wireless and touch
screens to the portable media player. In 2008, ARCHOS introduced the first Internet Media
Tablets, offering consumers uncompromised access to the Internet, movies, photos, video,
music and television anytime, anywhere. Now, ARCHOS introduce Internet Tablet, PC
Tablets, Netbooks and MP3/MP4 Player. Established in 1988, ARCHOS has offices in the
United States, Europe and Asia, and is quoted on Compartment C of Euronext Paris, ISIN
Code FR0000182479.

About ALCATEL ONE TOUCH / TCL COMMUNICATION
ALCATEL ONE TOUCH designs, manufactures, and markets globally an expanding portfolio of
mobile and Internet products designed to be as individual as the people who use them.
Currently the fastest growing of the world’s top ten mobile phone manufacturers, ALCATEL
ONE TOUCH makes access to today’s mobile lifestyle simple by offering colorful, easy-to-use
devices equipped with the technology people need most at smart prices they can afford.
ALCATEL ONE TOUCH is a brand of TCL Communication, a public company listed on the Hong
Kong Stock Exchange (2618.HK) and part of TCL Corporation one of the largest consumer
electronics companies in the world. For more information, please visit
www.alcatelonetouch.com.