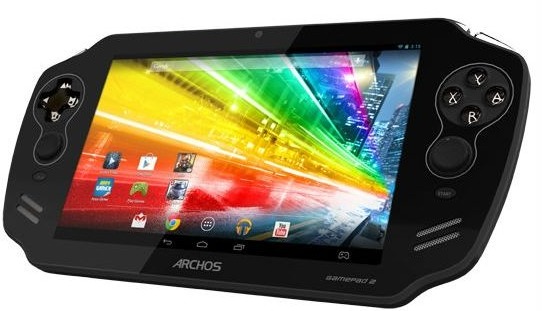 When Archos pre-announced its new device lineup ahead of the IFA trade show early this month, it made mention of the successor to its unique GamePad gaming tablet. The device, however, has not yet been seen in the wild and we are left wondering if it had been scrapped altogether. It seems, though, that the GamePad 2 is still on its way and will indeed be an upgrade compared to the original version.

The first Archos GamePad launched in the US last March and, while the idea was interesting, the execution was disappointing. The GamePad allowed regular Android game touchscreen controls to be mapped to the device’s physical controls that afforded a better gaming experience. Unfortunately, the hardware that ran the device was underpowered and the controls were a bit clunky. Fast-forward half a year later, and Archos was set to release a new and improved version of the device.

The GamePad 2 briefly appeared on the HKTDC website and was immediately pulled out, but not before some were able to get a glimpse of its specs. The GamePad 2 will now be sporting a quad-core 1.6 GHz processor, which is hinted to be a Rockchip RK3188, so actual performance might vary. It will also have double the RAM at 2 GB and come with 8 GB and 16 GB storage options, expandable with a micro SD card. Thankfully, the screen, while remaining at 7 inches, has been upgraded to a 1280×800 resolution. The game pad controls appear to have remained the same.

Archos has remained largely silent about the device so we have no idea when, or if, it will finally hit the market and if it will be offered in the US at all. Pricing details have so far also been unknown, although we’re expecting it wouldn’t stray too far from a $200 budget range.