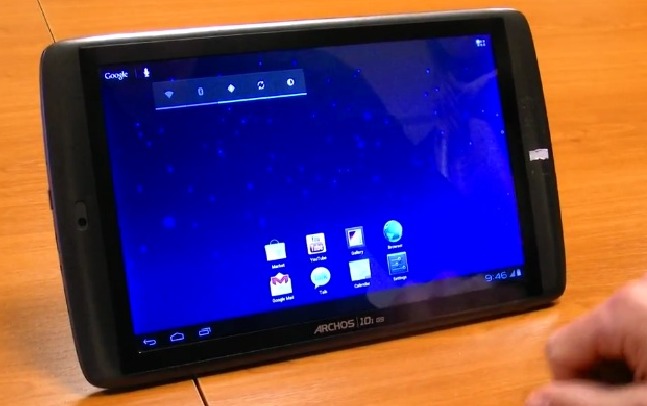 For those keeping track of the Archos line of tablets the latest edition G9 series are about to receive Android 4.0 Ice Cream Sandwich. We saw an early preview build back in December from Archos and were told to expect an update to the Archos 101 G9 and 80 G9 early 2012 — as soon as the first week of February. While the update hasn’t started rolling out yet a few online retailers are currently taking pre-orders for the Archos G9 with ICS.

We are expecting the official update to begin shortly but no actual date has been given by Archos as of late. However online gadget retailer Dynamism is now offering the slates up for pre-order with an expected ship date of March. We don’t know much about the online retailer and most likely you can get one anywhere as they are available now and just wait for the official update to land.

For those unfamiliar with Archos, while they don’t have the best build quality in the business they do offer a great tablet for a low price. The Archos 101 G9 features a 10″ 1280 x 800 resolution display, a dual-core 1.5 GHz TI OMAP 4430 processor, 1GB of RAM and 8GB of internal storage all for $329. Once they get updated with Ice Cream Sandwich they’ll be one of the best priced Android 4.0 tablet available — given the specs.

We are waiting to hear an official word from Archos regarding the rollout to Ice Cream Sandwich but for now feel free to pre-order one from the links above. If you have an Archos 101 G9 have you received Android 4.0 Ice Cream Sandwich yet?