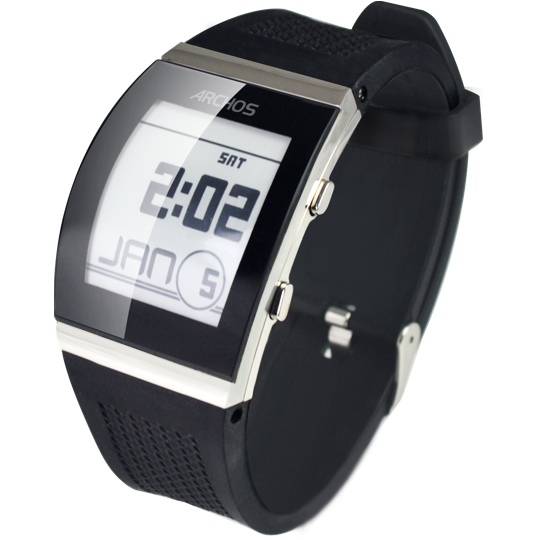 Archos has offered up quite a few Android devices. That list fills out mostly with tablets, however there are some smartphones and even some gaming devices included. And well, it looks like Archos is going to expand that collection as we move into the new year. The company has announced plans to unveil the “Connected Self” range of devices.

We expect more detail to arrive during CES, but for now Archos has said this line will include some smartwatches, an activity tracker, connected scale and blood pressure monitor. The watch, or more accurately, one of the watches can be seen above. Archos has said they have plans to unveil “a selection” of watches during CES.

Based on the pic, the watch appears to be e-ink, but for now they have left the description as having a “pebble-like design.” The watches will be compatible with Android and iOS and will be priced starting at less than $50. The other bit on the watch is how they will “embrace simplicity.” We have yet to see any pricing for the remaining three items, however as you can see below — Archos has the activity tracker, scale and blood pressure monitor pictured.

The activity tracker will keep track of details to include your steps and calories burned, and when synced with a smartphone, it will display the time. The tracker will charge over USB and have a battery life of up to 7 days. The connected scale will track weight and body fat and will be able to keep details for up to four different users.

Lastly, the blood pressure monitor. Here Archos has said this will include a detector for irregular heart beats and will be able filter data for time — such as morning, day and evening. This monitor will also display heart beat information and has memory for more than 40 different measurements. Once again, we expect Archos to release more specifics come January.