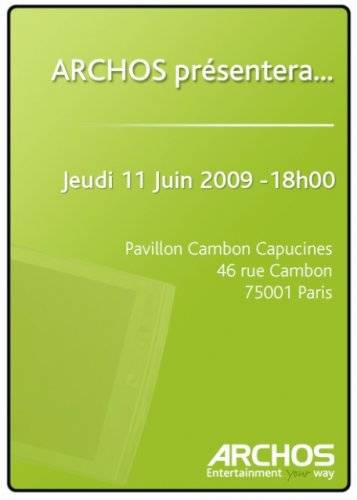 Could Archos be planning to announce their Android-based Internet Media Tablet phone on June 11th?  That’s the leading interpretation of the company’s new press conference invite, which confirms an event in Paris, France in less than a month’s time.

While there’s no written hint of what Archos may be announcing, the shadowy large-format MID/PMP device pictured on the invite, and the Android-esque vivid green color scheme are suggesting that it’s their Android IMT that’s on the agenda.  First tipped as in the pipeline back in February, the device is expected to include WiFi, 3G HSDPA/HSUPA, a 5-inch touchscreen and HD support in a chassis just 10mm thick.

Archos then went on to tip a July release for the Android-PMP in their financial report, naming the device as one of three core strands of the company’s 2H09 sales drive.  TI’s OMAP3440 applications processor is expected to run the show, with “laptop-like” performance for HD playback.

[via SlashGear & via Pocketables]