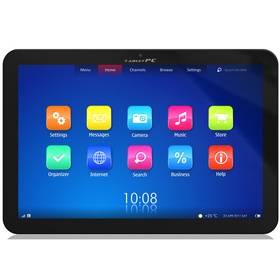 It was estimated in 2009 that if the New York Times sent every one of its paying subscribers a free Amazon Kindle, they would still save half the cost of physically printing and delivering the newspaper every day. It looks like Archos and TigerDirect are taking that thought experiment into the real world. They’ve begun a program that lets publishers customize and brand an Android tablet to their subscribers’ needs, then subsidize the cost of the tablet for cheap, efficient e-reading.

The first model of the tablet appears to be a heavily modified version of on one of Archos’ 10-inch tablets. It features a webcam and (I suppose) a wifi connection for reloading regular content. The program, named PubTab, utilizes Archos’ manufacturing expertise and TigerDirect’s customer support infrastructure.

So far only one publisher has jumped on board: Philadelphia Media Network Inc., owner of Philly.com and various local print publications. Their version of the tablet features four apps that automatically fetch the latest daily or weekly version of the print magazine they’re paired with. The concept is and interesting one, and as electronics become more inexpensive and powerful, expect similar ventures to start popping up in all sorts of industries. The New York Times may not be abandoning its paper pages for many years, but when it does, you might just be holding an NYT-branded e-reader.