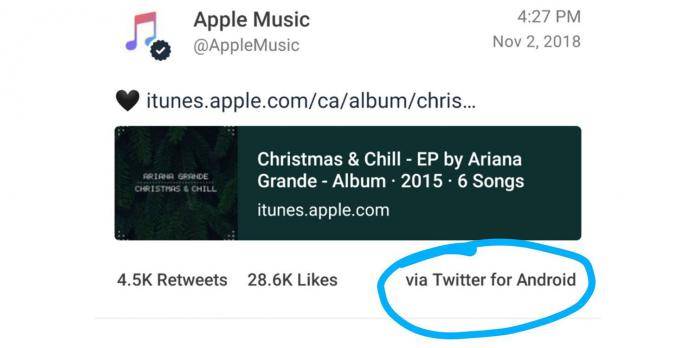 Well, this is a nice change of pace for embarrassing moments for Android. Where usually you find Android-related accounts or tweets posting from an iPhone, this time around it’s an Apple account that inadvertently made a mistake as to where it’s tweeting from. The Apple Music Twitter account responded to a tweet from Ariana Grande but eagle-eyed Twitter users noticed that the tweet came via Twitter for Android. Obviously, this means whoever was tweeting was using an Android device.

We’re used to this kind of thing, but the other way around. We’ve seen instances where a celebrity, or worse, an official from a certain OEM who will tweet out something to promote an Android product but people can clearly see they tweeted it out from an iPhone. We’ve seen it happen to an official account from Samsung (which eventually led to that account being deleted), to Gal Gadot praising the Huawei Mate 10 from an iPhone and most infamously, from President Donald Trump calling for an Apple boycott while tweeting from, you guessed it, an iPhone.

This time around, the tweet isn’t that bad but still embarrassing. The Apple Music account responded to Ariana Grande’s tweet about her Christmas & Chill album. It tweeted out a link to the EP on Apple Music and included a heart emoji in the tweet. However you can see that the tweet was sent via Twitter for Android.

It’s not that big of a booboo given that there is an Apple Music for Android app, but it’s still pretty embarrassing given it’s an official Apple account and also given the intense rivalry between Android and Apple. Still, it’s not as bad as the previous faux pas that we’ve mentioned. So the lesson here is, make sure you’re using the “correct” smartphone when posting on social media.