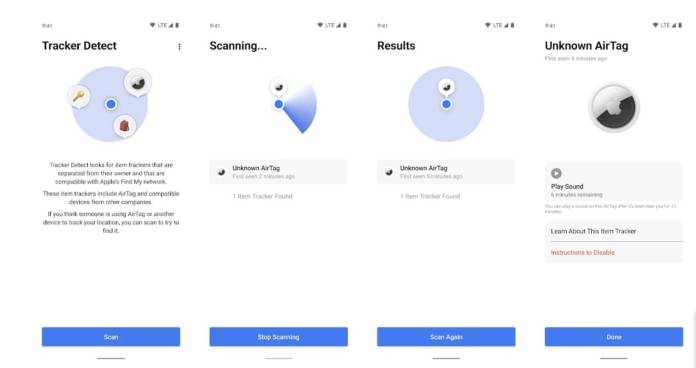 While item trackers like Apple’s AirTag can be pretty useful, especially for those who keep misplacing things. However, as we’ve seen in some disturbing news, it can also be used for bad. Some use these trackers to stalk people or to help them rob unsuspecting victims. Apple has now released an app for Android devices called Tracker Detect that will help keep users safe as it can scan for nearby AirTags or other Find My-compatible devices that may be following you around.

Once you install the Tracker Detect app on your Android smartphone, you’ll have to agree to some terms mostly about location tracking and all that. When you tap the scan button, it will scan the nearby area for any AirTag or compatible device using Apple’s Find My network. If it detects something, it will show “Unknown (device name)” as well as what’s the last time it was found. You can learn more about the tracker and if it’s been near you for 10 minutes, you can have it play a sound so you can easily find it.

Once you’ve found a tracker that someone may have deliberately put in your bag or somewhere near you, you can get instructions on how to disable it, including how to remove the battery. The app’s main purpose is really to protect you from these malicious uses of the trackers. There might be times though that someone around you legitimately has a tracker within their own things that they may have misplaced so you have to make sure that it’s not like that.

The Tracker Detect app can only scan for trackers that are separated from their original owner. This means the app is not an actual AirTag app. It’s just a safety measure for those who may be afraid someone is tracking them but it’s not a full-fledged app for the AirTags. For the actual AirTag app that you would need to manage your trackers, you need to have an iPhone for that to be able to run the AirTag app.

But if you’re an Android user, you can download the Tracker Detect app from the Google Play Store. Hopefully this can help people keep safe from nefarious AirTag users.