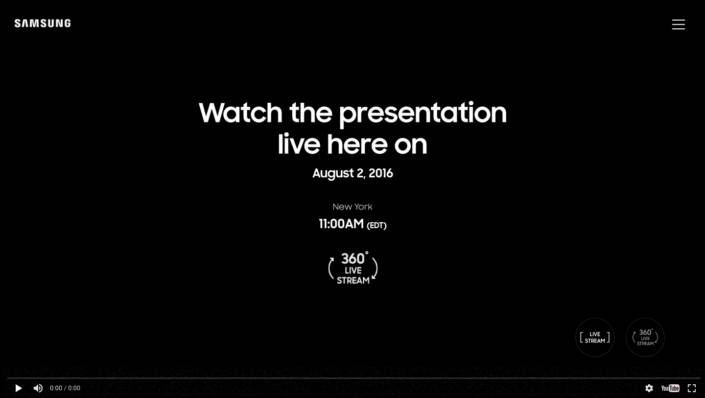 If you think you needed to be media or a social media popular person in order to witness the unveiling of the Samsung Galaxy Note 7 on August 2, apparently all you need to do is to have a laptop, tablet or even a smartphone and an Internet connection. The Korean OEM is opening up the invitation to anyone who wants them to see reveal their latest phablet, which apparently skipped a number to avoid confusion and keep up with the current flagship, the Galaxy S7 and S7 edge.

The physical events will actually be happening in three places simultaneously: New York City, London, and Rio de Janeiro. Anticipation for this new phablet is at fever pitch given that we have less than 36 hour now before we find out if all the rumors that have been flying around (the enhanced S Pen, the iris scanner, etc) are actually true or have a grain of truth in them. Anyone who wants to watch the event can do so online through their 360-degree live streaming event on August 2 at 11AM EST.

You have three options on how to watch their launch event. If you’re mobile at that time, you can go to the Samsung website, specifically samsung.com/galaxy or their YouTube channel, Samsung Mobile. Choose the 360 Live Stream, unless you don’t want to see it in its 360 glory. If you have the Samsung Gear VR headset, you can search for the Unpacked 360 View app on the Oculus Store then install it and launch the app when the event starts.

Lastly, you can also watch it on your laptop or PC by going to their website, samsung.com/galaxy and then clicking on the 360 Live Stream section. Expect even more leaks and rumors as the hour draws near for us to officially meet the Samsung Galaxy Note 7.