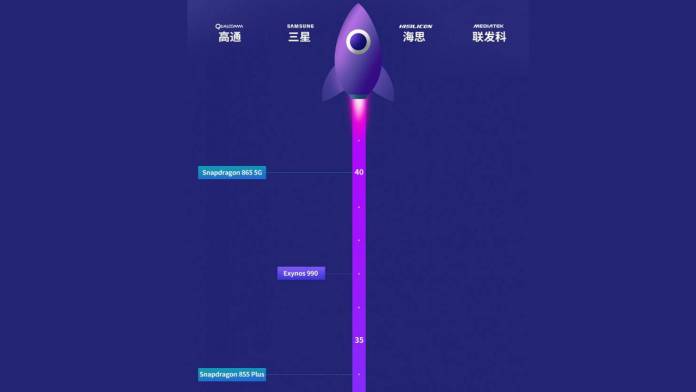 AnTuTu frequently comes out with benchmark tests for mobile devices to give buyers a fair idea of the performance they can expect from the device. The results are driven by the performance of the processor in sync with the screen refresh rates and storage speeds. So, for the same processer powering two different phones having different hardware, the test results will vary. Recently, AnTuTu has conducted a test which solely determines the processing power of new-age chipsets.

This time around AnTuTu only considers the CPU and GPU performance of the chipset. The cumulative score of all the phones running the respective chipsets are taken into account for better accuracy. So, if you want to judge a phone’s performance solely on the basis of processor, this test is the benchmark to go with.

Dubbed the AnTuTu V8 test, it is published on AnTutu’s new page which represents the capability of Android phone chipsets in an infographic. There’s a rocket representing the speed capabilities, with the fastest chipset at the top and the slower ones down at the bottom. Predictably, the Snapdragon 865 5G processor is at the top position followed by Samsung Exynos 990.

The third place is bagged by Dimensity 1000+ which is kind of surprising and shows the raw power of MediaTek chipset. In the fourth position is the last year’s Snapdragon 855+ processor ahead of the Kirin 990 5G processor. The test evaluates chipsets as old as Snapdragon 425, Helio A22, and MT6750 which are at the bottom of the ladder.