Year 2017 started with the CES and so far, we’ve seen a few smartphones that have potential to make our lives easier. We’re certain that most OEMs and brands want their latest products to succeed in the mobile business, coming up with new features and technologies. We haven’t quite identified one that will be a game-changer this year but we’re looking at those Tango-enabled phones that allow us to experience more of augmented reality (AR) in our everyday lives.

Every quarter, we’re interested to know what smartphones became popular and more widely used. For such figures, we depend on AnTuTu to tell us what devices from what brands and platform made it to the list. We’ve been waiting to know the rankings since there were many interesting and controversial smartphones released last year. AnTuTu has finally revealed its list of Best Performance Smartphones of 2016.

AnTuTu’s ranking results are more accurate as the analysts tried to optimize the scores that came up. Incomplete and cheating scores were removed to ensure accuracy. Newly added is score stability as new reference factor of the scores. To finalize the rankings, AnTuTu listed the average scores of devices from January 1 to December 31, 2016. About 2,000 data sample for a single model were looked at for this report.

Also listed is LeEco Le Pro3, Moto Z, OnePlus 3, Xiaomi Mi 5s, ASUS Zenfone 3, Xiaomi Mi 5s Plus, and the ZTE Axon 7. AnTuTu noted that most of these phones were released during the second half of 2016. One reason that they were included in the Top 10 was because of their processors. Naturally, the latest phones feature the latest processors. Both iPhone 7 variants run the A10 processor. The best Android devices use the Snapdragon 821 or 820 processor. Focusing on the Android phones only, the Google Pixel XL and Google Pixel are added to the list. 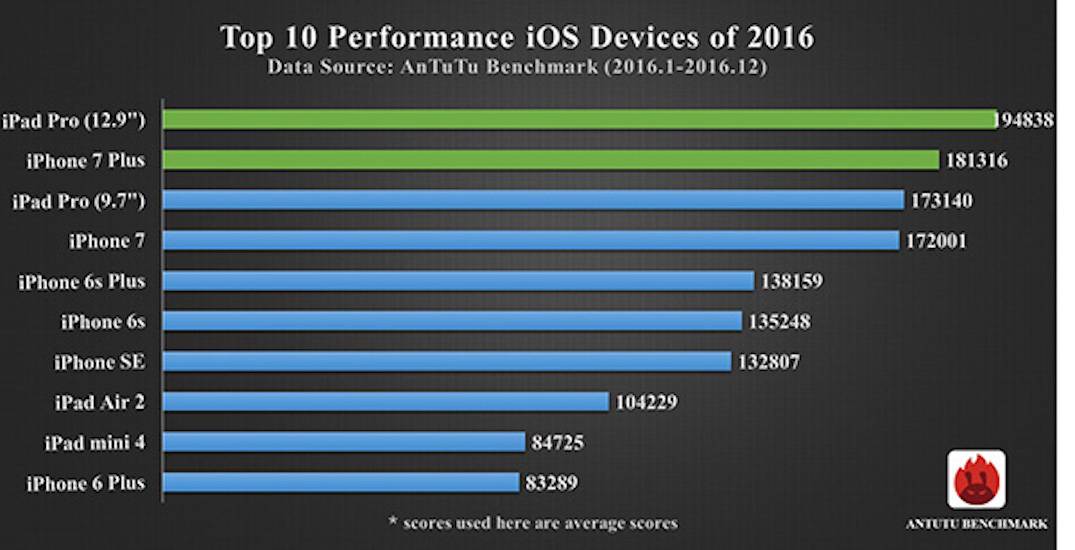