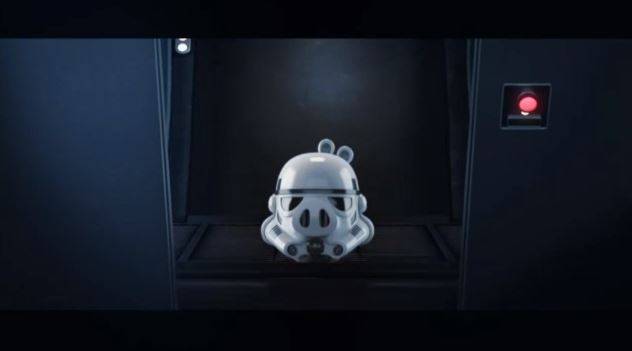 We have another Angry Birds Star Wars teaser to share with you today, and this one is a bit funnier than the last one we showed you. Again, this latest teaser doesn’t show any gameplay footage, instead giving us another clip from the classic films. Last time, it was the scene from A New Hope where Han tells Luke and Obi-Wan about his famous Kessel run, whereas this time, we have Princess Leia asking about the stature of a curious-looking Stormtrooper.

Normally, after Leia asks “Aren’t you a little short for a Stormtrooper,” we’d expect the camera to cut to Luke, who pulls off his helmet and declares that he is the mighty Skywalker come to rescue her. Instead of that, this time we’re treated to a shot of one of the titular Angry Birds dressed in Stormtrooper armor. The bird attempts to take off his helmet to deliver the famous line, but instead discovers that the helmet is stuck and proceeds to bounce away, defeated and fuming.

We have to say, this is one of the more hilarious trailers Rovio has released for Angry Birds Star Wars. It’s sad that we don’t get to see any gameplay footage, but then again, we already know how Angry Birds plays – fling the birds at the pigs to win. Since every installment of Angry Birds has followed this basic principle, there’s no real reason to think that Angry Birds Star Wars will be any different.

Of course, that could be what Rovio wants us to think. Maybe the developer has some special gameplay changes in mind for Angry Birds Star Wars? It’s fun to consider, but it probably isn’t the best idea to get your hopes up for some major gameplay changes. In any case, we’ll have more details on Angry Birds Star Wars as we continue to barrel toward the game’s November 8 release date, so keep it tuned here to Android Community!