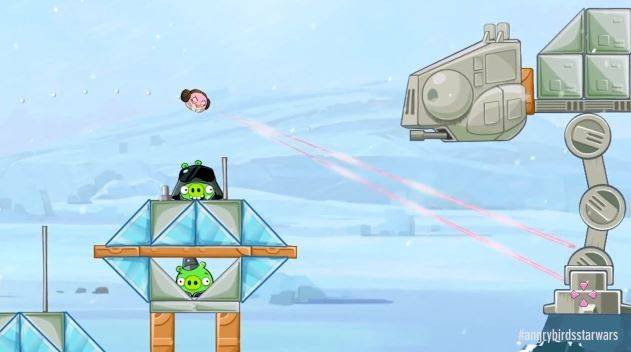 We’ve seen a lot of trailers for Angry Birds Star Wars recently, but so far none of them have featured any actual gameplay. Instead of showing us what we’d really like to see, Rovio took famous clips from the movies and inserted its famous birds into them. Some of them were cute, others were silly, but now its time to cut out the funny business and get down to the nitty gritty: it’s time for gameplay, baby!

This latest trailer features some actual gameplay footage, but sadly, the look we get doesn’t last very long. Still, some is usually better than none, and in this case that holds true. It appears that the gameplay in Angry Birds Star Wars isn’t all that different from Angry Birds installments of the past, but there are enough differences to make it stick out from the rest.

For starters, the style is Star Wars-themed (obviously), with the birds dressed up as the heroes from the movies like Luke and Leia, while the pigs have donned their best suits of Stormtrooper armor. We also get to see the pigs driving an AT-AT at one point, which is definitely cool. Power-ups are Star Wars-themed as well, with one of the birds unleashing its lightsaber on the pig-built structures as it soars in for a collision.

In short, if you happen to be a fan of both Star Wars and Angry Birds (we’re assuming there are at least a few of you out there), this should be right up your alley. We look forward to seeing more gameplay in the coming days, but it won’t be long until the full game arrives at last. Angry Birds Star Wars launches on November 8 – are you picking this one up, or will you be skipping it?