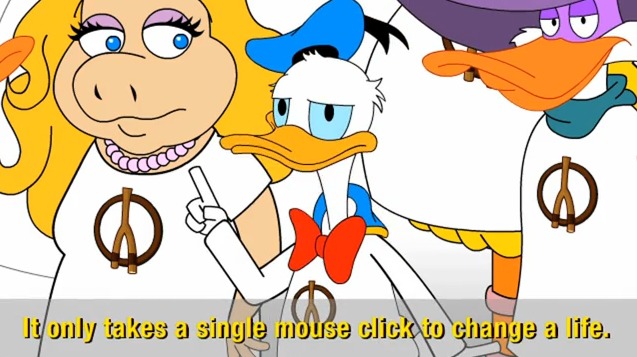 Everyone from Daffy to Rocksteady have come together to bring you this public service announcement. This message is a very serious one, with every celebrity bird and pig speaking out against what they’re calling the “Angry Birds War.” This is a war where noone is safe, pig or bird, and where birds and pigs deaths number in at over 1 billion, “that number nearly doubling if you count every blue bird as four birds” (that’s right!)

Rocksteady, whom you’ll recognize from his role playing himself in the hit cartoon series and comic book Teenage Mutant Ninja Turtles, speaks of the ongoing effort by the name of Habitat for Hogs where despite their efforts, millions of pigs are “still without a fortress.” These cartoon stars ask us (birds and pigs) to stand together, breaking down barriers as we do so, or as Donald Duck says, “sit together if we’re on the toilet.” Peace be with you! That’s what they’re saying.

The ACME company is joining in this peaceful movement by doubling your donation to a scholarship fund that’ll send veterans of the war to ACME University. There, birds will learn that they are birds, not war machines, in a class called Ornithology 101. They slip in the fact that your donation will also support Farmville, a non-profit summercamp for orphaned piglets. “And together, we can give these pigs and birds a replay at leading three-star lives.”