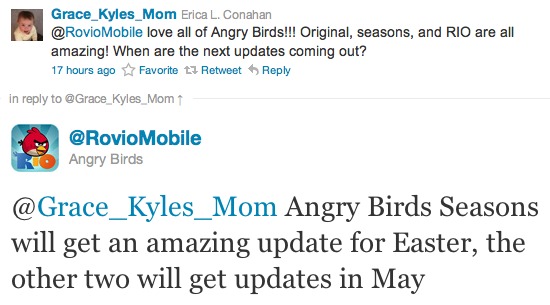 As you know, one of the biggest updates to Angry Birds basically just dropped upon the earth like one of those fat versions of the original hero. It’s called Angry Birds RIO and it’s done in collaboration with the film studio who produces RIO, this making the game series more popular than EVER with not only a pop up in a Superbowl ad, but spots on ALL RIO posters as well. Now we’ve got word that this game, the original Angry Birds game, and Angry Birds: Seasons will all be updated within the next two months.

In response to a nice lady named Grace_Kyles_Mom, the folks at Rovio revealed that the next BIG update to an Angry Birds game would be an Easter addition to the Seasons expansion. Bet you didn’t see that one coming! Then there’ll be not only an additional level opened up on the RIO version of the game, there’ll be additions made to the original game as well.

Now I suppose you MAY be wondering where our full spoiler guide to Angry Birds RIO is, since we’ve done a similar guide less than 24 hours after the release of both of the previous updates. Truth is, this RIO version of the game isn’t as EASY as, say, Valentine’s Day, which we beat in under an hour. RIO is a whole new version of the game, and only 2 levels of it are currently revealed to the world. What we’re going to to instead of showing you every stage from the first two levels at once, is give you a special treat in May, when the world once again bursts open with the anger of a thousand feathered friends.