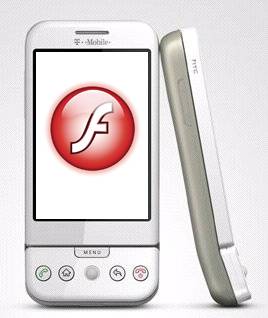 This morning  at Adobe’s MAX event, Andy Rubin made an appearance and had a chance to show a brief demo. Do we even have to say what it was he was doing there? Here is a hint, he was doing a demo with the beloved T-Mobile G1.

Andy Ruben has officially shown that Flash can run on Android. It is one thing to talk about it coming to a device, hint hint Apple, but when a device is released and shortly after is shown running Flash, it speaks volumes. Not only is it possible, but Android will be running Flash soon enough.

Ruben did not say when we will see it happen or in which way it will be delivered, but actually showing the demo live must mean we will be getting it fairly soon. What an amazing gift it would be from Google to wake up Christmas morning with Flash running on our G1. Adobe has already said that the iPhone will have flash as soon as they allow it. This is just one more way that Android and the G1 are outdoing Apple and the iPhone.