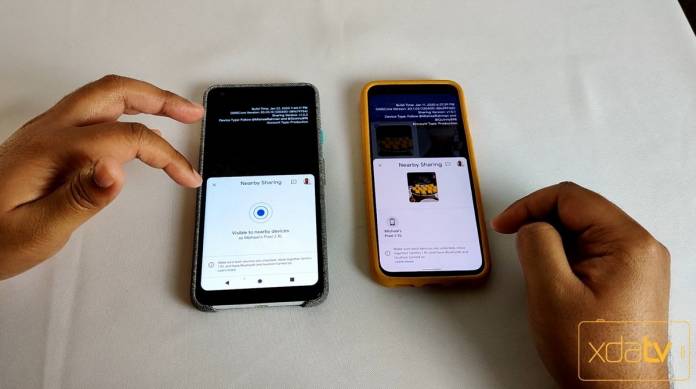 It seems like we’ve been waiting forever for Google to finally release a nearby device file sharing service similar to Apple’s AirDrop. But reports over the last few weeks indicate that we may finally be getting one. Initially called Fast Share, it was later on renamed to Nearby Sharing. And while it’s officially not yet available, some folks have been able to activate the service on his devices and the good news is it will probably not be a Pixel-only feature.

XDA Recognized Developer Quinny899 posted a video that he was able to activate Nearby Sharing on his devices, prompting the other folks at XDA Developers to activate theirs as well. Since the service will be baked into Google Play Services, this means that the wireless file transfer will work on Android devices that have it installed. It will probably not be a Pixel-only service although we won’t know for sure until Google activates it for everyone.

From what we’re seeing in the video, the file transfer is pretty straightforward and that’s just what we need. You have to pull down your Quick Settings panel and then tap on the Nearby Sharing tile. Transferring a single image will open it up in the image viewer but it seems that transferring several images at once will not open it directly there. They are stored in the phone though in /DCIM/Nearby Sharing so they’re still pretty accessible.

The transfers happened relatively fast since it uses WiFi unlike the previous file transfer service from Android called Android Beam. The latter was pretty “underutilized and undermarketed” and so it eventually went away. Hopefully they won’t be making the same mistake with this one, especially as other OEMs are already developing their own file transfer services, including Samsung that may soon be releasing Quick Share.

As to when we can expect Nearby Sharing to rollout, there’s still no news on that front. While the version that they were able to activate still has some rough edges, the basics of it are ready and so hopefully, this will roll out soon.