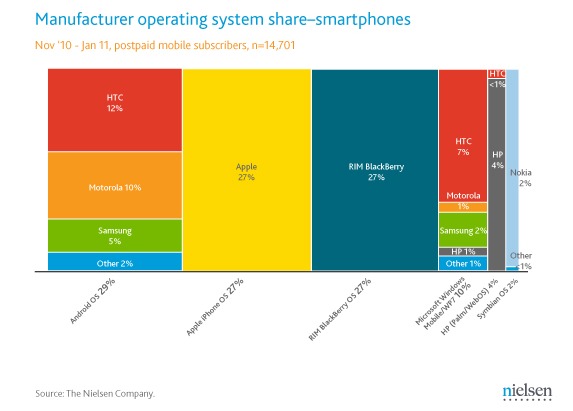 It seems like every couple of days now there’s a new report saying that Android is either the fastest growing group in the Mobile world or that it’s not even close to being up on top – Nielsen today reports that it’s sort of both. In a November 2010 – January 2011 report, Nielsen shows that although Android holds the top position in OS marketshare, but loses out on being the strongest because of its reliance on third-party manufacturers such as HTC, Motorola, Samsung, and all the rest.

These statistics show the manufacturer operating system share for smartphones to be clearly dominated by Apple and RIM BlackBerry if you’re talking about groups that both produce their own OS and their own hardware, but they get ever-so-slightly inched out by Android if you’re just talking about operating system dominance. Of course down below all of these by a significant amount is Windows Phone 7, then Palm/Web OS, then Symbian.

In an additional study in the same vein, Nielsen shows Android to be winning in the younger age bracket, with ages sliding toward an older crowd as the chart moves to Apple, then BlackBerry. The oldest crowd appears to be preferring Symbian, while the very youngest crowd loves, believe it or not, Windows Phone 7. 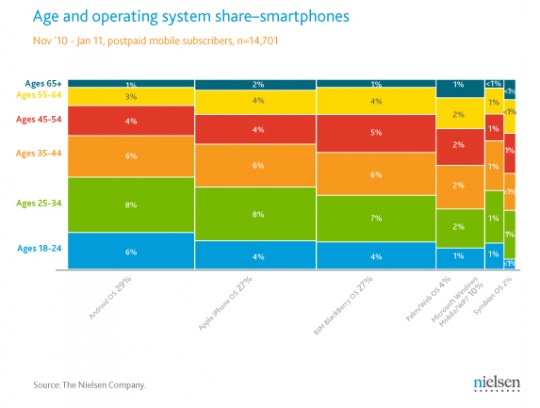 Will Google be happy when they see these results? Hard to tell. Will they agree that they’re in a weaker position than Apple or BlackBerry because they don’t manufacture their own gear (other than the Nexus One and Nexus S, of course?) We really REALLY doubt it. Android is very clearly racking up a gigantic market share for the age that it is, and it’s showing no signs of slowing down because of a market of several manufacturers. In fact if you asked us, we’d say they were stronger for it since these makers of devices are pitted against one another in a fight for the greatest piece of hardware. Greatness unfolds!