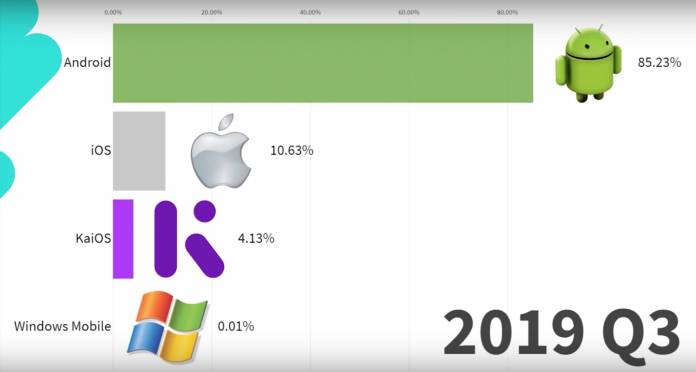 If you were born when smartphones and Android or iOS has been the dominant force in the mobile market, it’s hard to imagine that there was a world when the two were still non-existent. But that’s exactly what this new video from data visualization YouTube channel “Data is Beautiful” has reminded us. Simply titled Most Popular Mobile OS 1999-2019, the video shows the rise and the downfall of all the mobile OS we’ve known for the past two decades.

In the 3-minute video, we are reminded that since mobile operating systems started in the late 90s, there have been a lot that have come and gone over the next 20 years, including Palm OS, Blackberry OS, Symbian, Windows Mobile, etc. They all had their moments of dominance and popularity but when iOS entered the market in 2007 and then Android in 2008, they slowly but steadily climbed to the top and there hasn’t been any other dominant operating systems since then.

The source data that they used for the video is Gartner’s quarterly report on smartphone shipments so don’t think that this is an actual representation of the smartphone OS market share. Even then, market share is not the most important metric in this industry. For example, while Android may have more than half of the market share, Apple still has the bigger share of profit despite having less than 20% of the market share

It’s also interesting to note that Windows Mobile has been around since the beginning (or the beginning of the video) but their market share, which wasn’t really that strong in the first place, has been slowly dwindling over the past years. In fact, KaiOS, an ultra-low-end range OS even has better market share than them. Well, at least, they’re still there.

If you have 3 or so minutes to spare, the video is worth a watch. It’s actually mesmerizing to see how mobile operating systems have evolved over the years, at least in terms of market share.