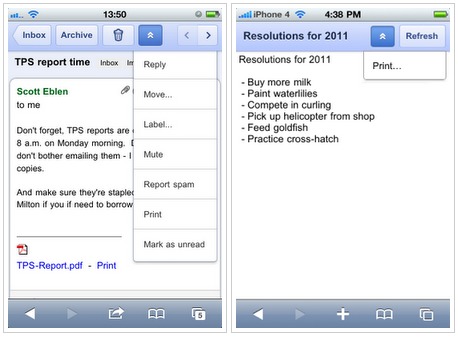 Waaay back in April 2010, Google announced that support for printing from any app on any device, OS, or browser without the need to install any software. Everyone said – that’s totally crazy, but now they’re back with some more words on the subject. Just this past month, Google Cloud Print was activated for people working with the Google Chrome Notebook pilot program, the project in which a pre-wave of Google Chrome notebooks were sent out to people willing to test them out and report back to Google for further development. TODAY Google is announcing a Beta version of Google Cloud Print for mobile documents and Gmail for mobile, rolling out now and throughout the next few days to users across the map.

This functionality will be being released to English speaking users in the US today and tomorrow and will work on most phones that work with HTML5, that being devices for the most part running Android 2.1 and higher. To get this feature to run, you’ve got to start by connecting your printer to Google Cloud Print, this feature only available at the moment for Windows PC computers – blech! What the heck?

This functionality will work in the following way – open up a document in Google Docs or Gmail, select print, and see it print to your printer. Simple as that. Pretty neat stuff.