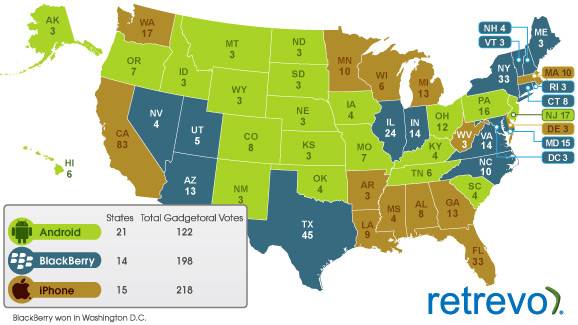 Oh I bet you didn’t know that devices such as these got to vote this electoral season, did you? They don’t get to vote on humans, don’t worry, and technically it isn’t them voting, it’s their users, and they’re getting voted on, not representatives for them. Retrevo, master of census taking in strange places, recently had a vote across the whole 50 nifty United States and found that of the three: Android, Blackberry, and iPhone, the victor was none other than our friend the robot.

This election was run in a way very similar to that of our presidential election for example, with both so many votes per state and an electoral college. The difference is, people cast their votes by telling the truth about which phones they owned. Gadgetoral votes were calculated based on ownership of each smartphone per capita across the country, while each state was granted a 3 vote minimum as per the real electoral college. State counts were created based on the difference per capita ownership between individual states and the the national average.

This entire vote was conducted Match 2010 through July 2010 online and consists of responses given by Retrevo users without restriction of gender or age. Location was taken in to consideration, and all votes were given an amazingly generous 95% confidence level with a confidence interval of +/- 4%. So basically it would have been even more amazing if they’d taken sale reports instead of asking users to tell the truth, but hey! This way’s much more fun.