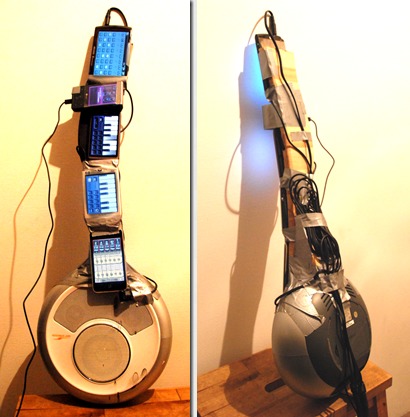 This may be one of the coolest inventions I’ve ever seen. A coder by the name of Steffest has managed to get these three OS’s to work together on a music app. The guitar looks cool also, it consists of a few of these phones strapped to it somehow and the music is made by pressing the various touch screens on the guitar.

More information on the project, from the artist himself:

I decided to create the same mobile app – a small piano/drum sequencer thing – on 3 mobile platforms: Android, Windows Mobile and iPhone OS. As a developer I didn’t quite succeed: audio latency is a b*tch and building the app from the same source proved to be possible but unusable, so I ended up writing it three times: in java for android, in C# for windows mobile and in Objective-C for iPhone… To play them all at once I just taped them on a piece of wood together with a battery powered speaker. Add lots of audio cables and TADAAA: a very playable guitar shaped instrument that makes a hell of a noise… I added Pocket Stompbox, a virtual amp with lots of great real time effects and of course the FANTASTIC iShred app from Frontierdesign.

Ok, maybe it’s not that pretty to look at but it does get the job done. There is a bit of audio lag but overall it’s pretty good. It’s nice to see these 3 competitors playing nice together for awhile. Now that this is over let’s get back to the battle for the top OS (we all know its Android).