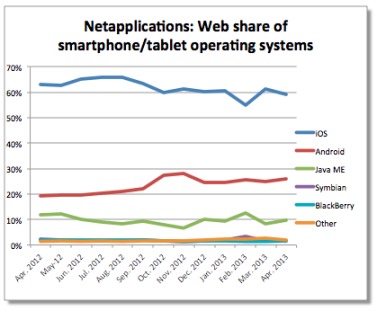 A new report released this week about the Android operating system in the share of web traffic generated by Android devices. Reports from a company called Netapplications and it shows that Android traffic on the Internet is up significantly compared to last year. According to the report, web traffic generated by the Android operating system is up 35% compared to the same period of last year.

Android now has 26% of all web traffic as measured by Netapplications. The report also shows that the iPhone and iPad combined account for 59% of all web activity. However, Apple has seen its share of web usage go through couple rough patches with a decline of 5.6% in February. iOS did rebound in March with a 6.5% gain.

One interesting aspect that the report does highlight is that while the install base for Android is growing significantly, but web usage for the platform isn’t keeping up with the overall growth of Android. Reports indicate that Android now has about 64% of overall smartphone market.

Despite owning more than half of the Android market, the operating system still generates less traffic on the web than iOS devices. Those numbers would seem to indicate that a large number of people adopting Android for smartphones and tablets simply aren’t going online, or at least aren’t visiting the roughly 40,000 clients that collect the traffic statistics for Netapplications. 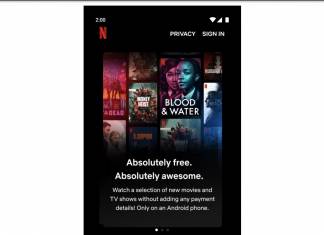 Ida Torres - September 21, 2021
Netflix really wants people in Kenya to start watching movies and shows on their streaming service. They are launching a free plan for those...