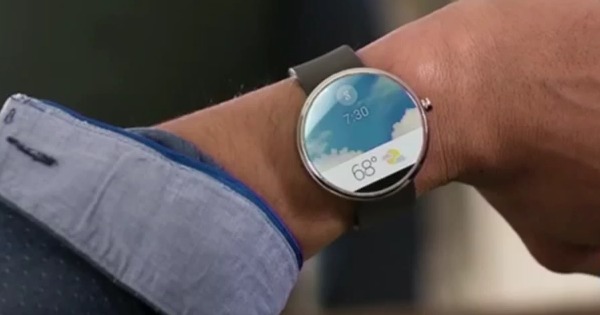 Google has just uploaded a new video that gives a brief introduction to Android Wear. While this clip is intended primarily for developers, it does give some insight on Google’s rationale for the wearables and what users can expect when Google unveils the first Android Wear smartwatches next week.

The whole point of Android Wear, much like Google Glass, is to detach users from their mobile devices, without actually disconnecting them. Unlike Google Glass, however, Android Wear, at least in its smartwatch incarnation will still require users to divert their gaze temporarily to look at a screen. But Google claims that such short bursts of distraction are exponentially smaller than having to take out your smartphone or tablet, fiddle with lock screens, notifications, and whatnot, before being able to actually look at the content. In short, the goal, or dream, is for people to bury their faces less in their smartphones and keep their heads up and enjoy the view and the people around them.

But to make that possible on a smartwatch, it won’t be enough to replicate conventions and designs we’ve grown accustomed to in smartphones. In fact, they won’t work there at all because of size and hardware constraints. Instead, Google is introducing a somewhat new interaction paradigm for Android Wear with “action” and “context”. Action is how you talk to the device, from voice commands to taps, while Context is how the device will talk back to your, again either through voice, buttons, or simply just notifications. For the most part, majority of our interaction with the smartwatch will be through notifications coming from a smartphone. The great news for developers is that, to get their app’s notifications on Android Wear, there is “No Work Required”. Except probably for a line or two in the program. 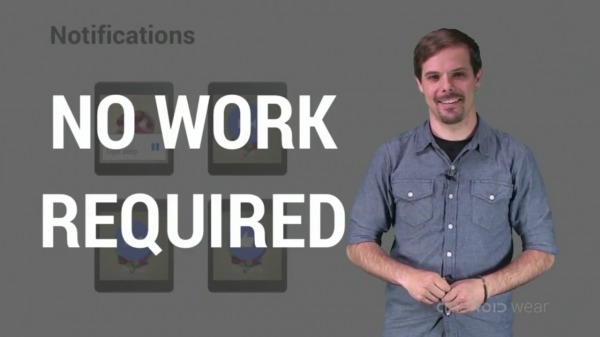 But Android Wear is more than just a glorified notification viewer (read: pager). It can do, or show, a lot more, and for that, developers will have to put in a bit of work. But the capabilities that will be made available will make it worth the effort. Developers will not only be able to show notifications or information in various forms, they can also direct data from a smartphone to the smartwatch, send sensor data in real time, and even register an app for a voice action like “OK, Google, call Mom.” These features are, however, still not available to developers, but the SDK will soon be in their hands, probably when Google makes the big splash this coming Google I/O 2014.