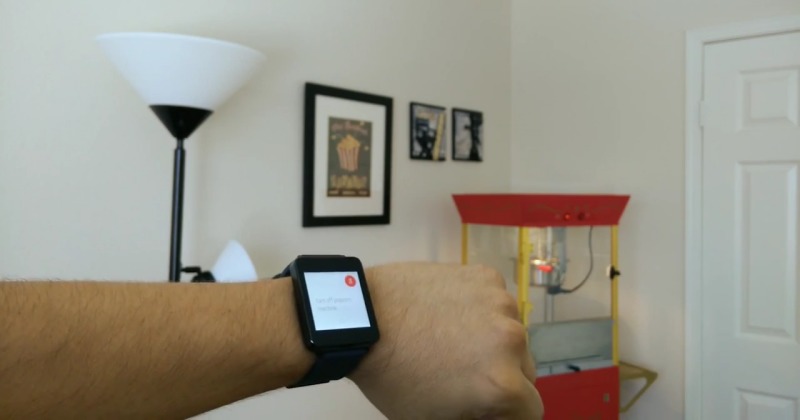 OK, so maybe it won’t directly make you some movie time chow, but your Android Wear watch smartwatch can at least turn on the popcorn maker to start the process. In fact, it can turn on and off almost any smart appliance, taking the new generation of smartwatches beyond the simple notification mirroring that Google has so far been demonstrating.

Google doesn’t want an Android Wear smartwatch to completely replace your smartphone, that’s for sure, but that doesn’t mean you can’t offload many of your smartphone’s duties to your wrist. So far, Google’s officially sanctioned demonstrations have shown Android Wear to be an extension of the smartwatch’s notification system and a few other informational tidbits that utilize Google Now’s access to the Internet. But Android users are a very creative bunch, so it isn’t surprising to see some who have turned a smarwatch like the G Watch into the stuff of science fiction.

The video below demonstrates the combination of an LG G Watch running Android Wear, Tasker on the smartphone to control the smart appliances, and a new app called Tockle that lets G Watch owners trigger Tasker from the smartwatch. Given Tasker’s almost limitless applications especially when paired with certain gadgets and appliances, this can turn a smartwatch into a practical control center for your entire smart house. There is a noticeable delay when trying to trigger Tasker via Google Now, but there is always an option to tap your way through the same tasks.

Of course, such things are really useful only if you have the appropriate pieces of equipment (read: smart appliances, plugs, and bulbs) to automate your house to begin with. The rest of the populace will most likely be limited to controlling their smartphones or other mobile devices that they can reach via Tasker. But you don’t have to wait for a smartwatch to actually enjoy all that. If you don’t mind hijacking Google Now’s “note to self” trigger, you can also try to do something similar with Commandr, which also integrates with Tasker as well.