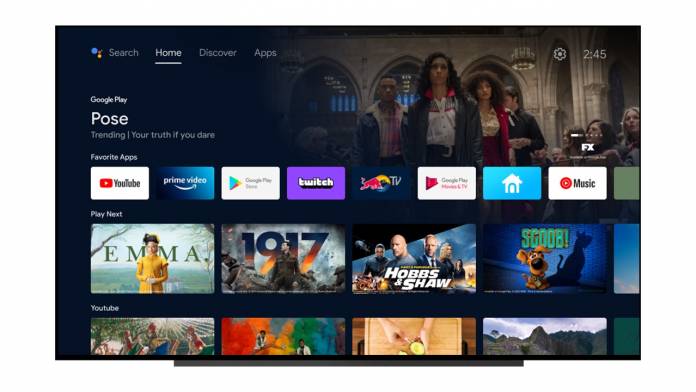 With the arrival of the new Google TV device and UI, we expected that Android TV will eventually catch up, at least with the user interface. It looks like that day has come as Google announced the rollout of a new Android TV home screen which gets a redesign that is similar to what Google TV looks like. Instead of the prominent sidebar that we’ve gotten used to, we’re now getting three main tabs at the top and one of those tabs is something new.

The current Android TV layout has a sidebar with the Apps, Play Next, and Netflix or Play Movies & TV icon is now gone. Instead, what we get are three main tabs at the top of your screen. We have Home, Discover, and Apps. The Home tab seems to be the same as the previous setup where you can quickly access your favorite apps and channels. The Apps is where you can of course see all the apps that you have installed on your Android TV.

What’s new this time around is the Discover tab where you will get personalized recommendations from across all the apps and subscriptions that you have. It’s based on what you watch on your streaming services and what the algorithm thinks will interest you. You’ll get a mix of movies, shows, and live TV recommendations and organizes them for you. You’ll see a Top picks section, trending TV shows, and new movies and shows.

Google further explains how they come up with recommendations in the Discover tab. It’s based on things that you watch as well as what you add to your watchlist, what content you’ve purchased or rented on Google Play, YouTube, Google TV, and Android TV, the streaming services you’ve selected, those entertainment-related searches on Google Search, titles you’ve liked or disliked, trailers you’ve watched on YouTube, and of course popular content in your region.

The new Android TV home screen is now rolling out to users in the US, Australia, Canada, Germany, and France. It will be rolling out in more countries in the next few weeks.