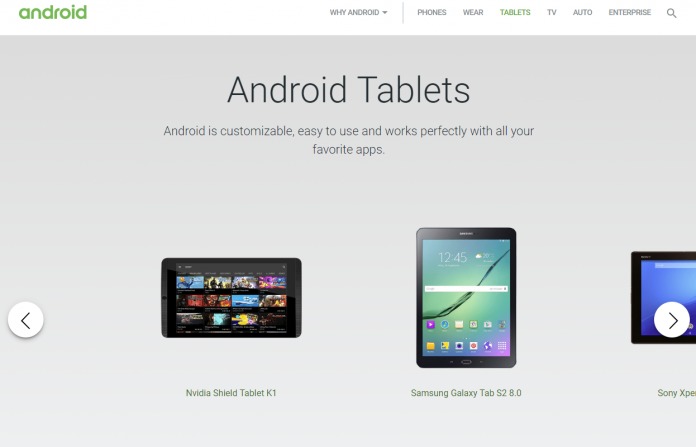 “Hey Google, why don’t you like Android tablets?” This is probably a question on people’s minds after Google “accidentally” deleted the whole tablet section on their official Android site. But even though they eventually brought the whole section back, this is just another indication that the tech giant has all but given up on Android tablets. While you can once again see what tablets are available on the platform, the ones displayed are from years ago so it’s really not a good sign for manufacturers and users as well. At least, those who still want to use Android tablets for work or for leisure.

According to a tweet by Hiroshi Lockheimer, the Senior Vice President for Android, Chrome, and Chromecast, the disappearance of the whole tablet section was due to a bug that crept up when they were updating the whole Android site. Users suddenly found the tablet section missing on the website that talks about the whole Android platform and could only see Phones, TV, Auto, and Enterprise. If you went to the url android.com/tablets, it would just bring you to the home page. So people were assuming that Google has officially given up on this gadget for this platform. It wasn’t really a surprise given how little they have been paying attention to it.

Oops we had a bug when we updated the site. It's back up now. Sorry for the confusion! https://t.co/5mI3L3Gzif

However, just a few hours later, things were back to normal. And by normal we mean displaying tablets that have been around for years and not anything new like the Galaxy Tab S2 8.0 or the Sony Xperia Z4 Tablet. We haven’t seen a tablet release from a major OEM for some time now, and it’s not really surprising since Google barely acknowledges its existence anyway. And the fact that there is no tablet included in the Android P dev preview is not a good portent of things to come for Android tablets if there are in fact even plan for it in the future.

There are probably several reasons why Android tablets have failed in general. One of those reasons is the fact that while there are thousands of apps available on the Google Play Store, very few of them are designed especially for the tablets. Yes, they will run on them but there’s something different about actually creating an app for a different kind of device rather than just optimizing it for a bigger screen. And devices, of course, rely a lot on available apps and if you don’t have that many interesting ones, then you won’t find a need for it.

Another reason was that there was very quick market saturation. OEMs started producing a lot of premium and cheap tablets and over-saturation will, of course, lead to non-profitability. And when companies aren’t making money from a certain line of products, then they will stop producing said products obviously. There was also an influx of cheap tablets that weren’t that great quality-wise. So the disenchantment with Android tablets began.

We don’t know what Google is planning to do or whether we will ever see a revolutionary Android tablet from a major brand. What we do know is that Google seems to be favoring Chrome OS more than creating a better platform for tablets. So if the tablet section eventually disappears again, it will probably not surprise anyone.