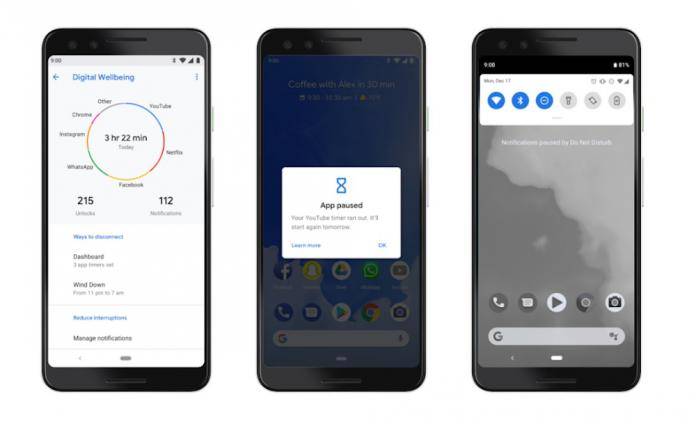 You would think that device and app makers would encourage people to stay connected during the upcoming holidays. While some actually do, Google is taking a different tactic this year and is suggesting ways you can actually “switch off” or at least find a balance between staying connected and actually connecting with loved ones during the various dinners and parties over the next couple of weeks. They’re sharing a couple of tools that you may want to use in order to help you “focus on being in the present”.

The first tool is of course obviously, the Digital Wellbeing features that they have introduced this year. Just in time for the holiday rush, it has come out of beta, at least for Pixel devices and Android One phones like the Motorola One, Xiaomi Mi A2, and the Nokia 7 Plus. Basically the Dashboard will help you figure out how much time you’re spending on your phone and hopefully this will convince you to slow down or take drastic steps to take a break from your phone.

You can actually set time limits on specific apps that you think you’re spending too much time on. You can also use the Wind Down feature to help you sleep at night as it will transition your full color screen to a grayscale one as you, well, wind down. If you’re using a Pixel 3 phone, you can just flip your phone and it will automatically turn on the Do Not Disturb feature to minimize your digital distractions.

Meanwhile, if your phone is part of a managed device program in your office, you can temporarily turn off your work profile. This means all work-related apps like emails and other corporate applications will be turned off during a certain period of time. You won’t get notifications about it and hopefully, you won’t be tempted to check them at anytime during your holiday. There’s a toggle at the bottom of your screen which should turn work mode on snooze.

Google says they are working on bringing Digital Wellbeing to other devices soon. That’s good news for non-Pixel and non-Android One users. We’re also waiting for Android 9 Pie to roll out more widely, but that will probably happen early 2019.