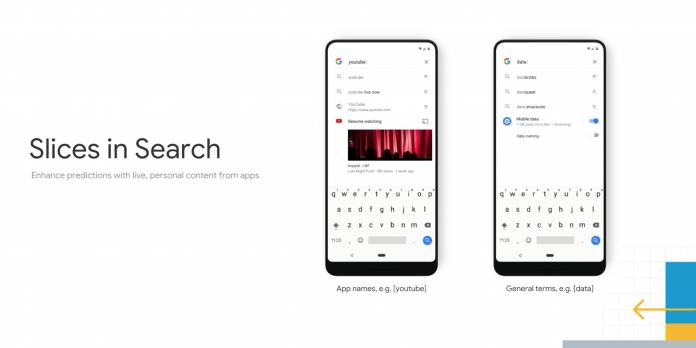 When Google introduced Android Slices at the I/O Developer’s Conference last year, it was pretty exciting to see how this UI paradigm would make your smartphone and digital life even faster and easier. It’s meant to show the key features of an app or setting in places that you naturally would look for it and want to access it, like in Google Search. It looks like they’re now finally rolling it out on the Pixel devices, at least for the Settings app.

If you have a Pixel device running on Android 9.0 Pie, you may already see some of these Slices UI appearing when you search for settings in your Google search app. For example, if you type Bluetooth, a toggle to enable/disable that setting will appear so you don’t need to go to the exact Bluetooth settings anymore to turn it on or off.

When you see a blue settings app to the left in the search results, that means it’s part of this new UI of Slices. Some like the WiFi toggle will have more context, showing the WiFi connection you’re currently using. For audio-related Slices, you’ll get a volume slider. While before you will only see the settings but you cannot take action, the new UI will now let you.

Other things that they showed during the developer’s conference are yet to roll out. For example, looking for Mobile Data will show you how much you’ve already consumed. Google Photos will show images right there on the search while even a third-party app like Lyft will have shortcuts to book your ride.

The enhanced predictions that Slice will bring will show up within seconds of you typing out what you’re looking for. It has started rolling out to Pixel devices running on Pie but Google has previously said it will extend back to Android 4.4 but that will probably at a later rollout.