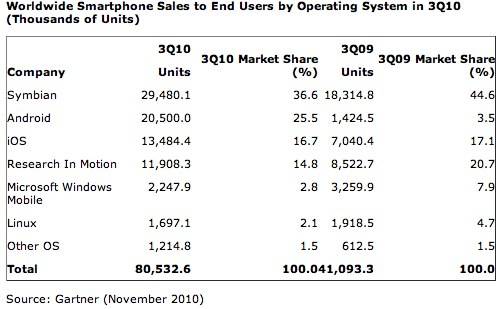 Gartner‘s latest smartphone stats are out, and according to their numbers Android is the second most popular smartphone OS worldwide. At 25.5-percent of the market in Q3 2010, that puts the Google platform behind Symbian’s 36.6-percent and ahead of Apple’s 16.7-percent.

However, the real difference is in year-on-year change, with Symbian dropping from 44.6-percent of the market share. Android, meanwhile, grew from 3.5-percent while iOS fell from 17.1-percent. However, Gartner still thinks iOS’ “multi-device presence” is still a key motivator for developers.