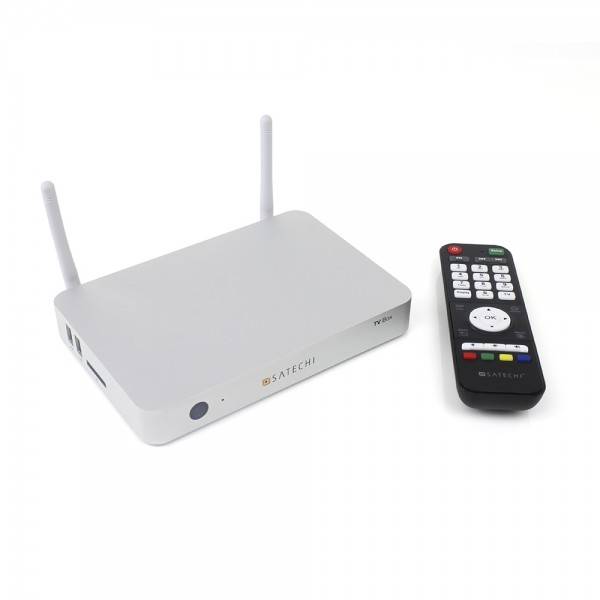 Satechi has announced their Android powered Smart TV Box, which they call “the ideal solution for users who want to stream digital media onto their televisions.” The newest Android device for the living room has some decent features, and an attractive price point. It also ticks one major box for Android fans, offering something that is fast becoming a necessity.

The Smart TV Box (yup, that’s the name, no fussing about with clever monikers) can connect to your network via WiFi or Ethernet. It also supports XBMC, which is open source home theater software that Satechi notes as “a media management app for streaming live TV, watching movies and videos, and accessing local storage.” Looking more like a router than a set-top box, the Smart TV has some decent specs to back up its software.

Satechi says the Smart TV Box is powered by a 1.8GHz processor, though they don’t note the manufacturer. They’ve also packed 2GB RAM in there, 8GB storage, and a quad-core Mali-400MP4 GPU. There are two USB ports and an SD Card slot around the side, so we’d like to think that 8GB is expandable, though they could be read-only. Around back, there is a single HDMI port, LAN, audio jack, and micro USB which is for “service and support”.

The Smart TV Box also comes with a pretty straightforward remote, HDMI cable, and power supply. There is also Bletooth connectivity, so you can tether a keyboard or other peripherals as you need. Perhaps most importantly, we get Play Store access here. Too often we’ve seen OEMs try to go it alone, only to fall flat due to lack of Play Store support. With this one, you’ll have access to all the games and apps you like, as well as the ability to stream media content.

The Smart TV Box is available now via the Satechi website or Amazon. For $109.99, it’s not hard to want to give it a shot. Though not a big name, the Satechi Smart TV Box could be the living room answer we’ve been asking for.