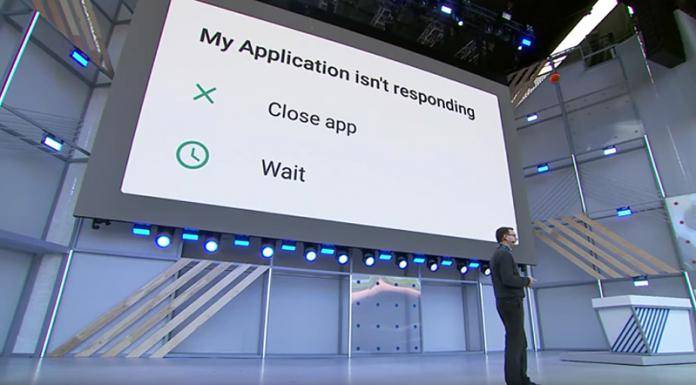 One thing all Android users hate to see on their device’s display is an “app not responding” (ANR) dialog box. It tells you that this app or that is not working correctly, giving you a choice of waiting or closing the app. Google has decided that the “wait” option sometimes takes too long, and most times won’t work. Users end up choosing the “close app” option, which leads us to this new development. It looks like Android P will just crash unresponsive apps directly, without the dialog box.

This new behavior was described on-stage at I/O 2018 by Reto Meier, head of Google’s Developer Advocacy and Relations. Meier just plainly said that they were now doing away with the ANR dialog, and that Android P will just directly crash the app. He also said in Android’s defense that crashing apps in certain scenarios isn’t new, and that it would encourage developers to fix whatever issue is causing the crash. See the video below, starting at the 14:10 mark.

This new approach by Google on Android P makes a bit of sense, but it might be a problem because the notifications are less visible to the user. Developers will have to do certain tricks – like keeping an eye on their crash tools such as Firebase crash reporting – to make sure they catch these bugs. It does give you a notion that Android apps are crashing less often, but that notion would not be completely true now, would it?

There is a fix for this, as you can enable a setting in Developer Options to bring back the dialog boxes. That’s going to be a boon for developers, and those users who like knowing what’s going on with their devices.