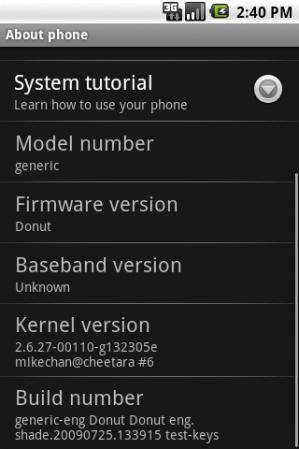 Google have released elements of Android OS 2.0 Donut to the developer community, and the changelist is already prompting excitement.  Among the differences already noted are multitouch and gesture support, together with CDMA compatibility opening up the possibility of Android devices on US networks like Verizon and Sprint.

There’s also improved universal search, automated backups and what developers are already calling a huge amount of performance tweaking that should hopefully see the platform running more smoothly even on existing hardware.  More technical issues have been tweaked, too, with WPA Enterprise encryption support together with VPN functionality.

It seems Google and HTC have been thinking along the same lines, too, as one of the most visible changes is the connectivity bar in the above screenshot, which allows for one-touch homescreen control over WiFi, Bluetooth and other connections.  The first hacked ROM suitable for the G1 has already been prepared, though be warned: core aspects such as network connectivity do not work, and this is really a build for early testers rather than those looking for the most functionality from their Android devices.  Such users should wait a while, as the frontline devs are promising new versions of OS 1.5 Cupcake with elements taken from 2.0 Donut.