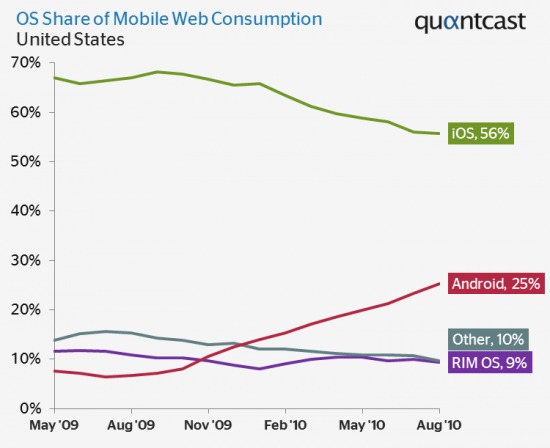 Android is slowly moving up the scale when it comes to web consumption, says Quantcast. Since November of 2009 Android has made it’s biggest gain and is up to 25%. Compared to last year, they are up 17% on the scale. What’s odd is Steve Jobs says more and more iOS devices are in the hands of people but the numbers are down from almost 70% to 56%.

This could only mean one thing, the amount of Android devices getting into the market is jumping by leaps and bounds. Another aspect of this could be, does this mean that Android users are consuming more things on the web? Either way, this is good to hear that Android is still having healthy growth and who knows by this time next year it could be a 50/50 split with Apple and Google. If you are thinking about buying and Android phone go ahead and do it, help the numbers go up.