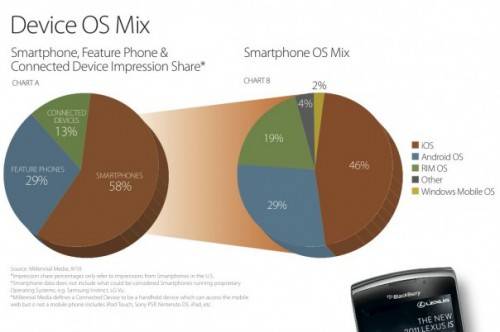 Private mobile ad network Millennial Media, responsible for sending ads for Fox News, MTV, ABC, Comedy Central, Time Life, and etcetera to cellphones and related tech, have released the following graphic depicting Android nearly atop the hill for ad impressions across their network. The reason for this may seem obvious: lots and lots and lots of Android phones are being released at the moment. Ad requests for Android devices have grown 1,284% since January, while Apple’s iOS has grown a puny 18% in the same amount of time.

Some might argue that the 17% difference between the two giants is too significant to call them close, but not when you consider the fact that the last time this chart came out, Apple was at 70% while Android was at 6%. Millennial also provides info that ad impressions on smart phones is growing 7% each month, with Chart A showing smart phones controlling 58% of the impressions overall. That’s a lot of app users getting spammed with pictures preparing for the MTV movie awards. Wowzers.