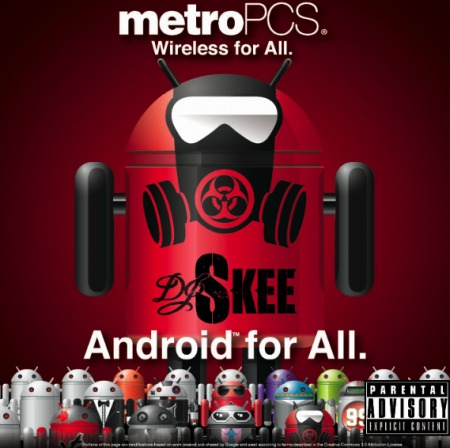 There is currently a mixtape floating around by the name of “Android for all.” This mixtape is mixed by DJ Skee and is presented by DJ Booth. How are Kanye West, Jay-Z, and Snoop Dogg involved? I doubt they’ve got any idea that they ARE involved, in fact, since the only brand endorsements we’re sure about here is MetroPCS (the mobile service provider) and SA Studios Global, the latter being a marketing and creative agency. We’re also unsure of Android or Google’s level of involvement, though we suppose it’s basically non-existent.

So what’s this mixtape made for? Surely it couldn’t just be for fun? No way, it’s for a toy designing contest being held by MetroPCS with the same name as the tape: Android for all, it consisting of creating a design for an Android toy that will then be produced in a limited edition run and given away as prizes. It doesn’t appear that Google is involved at any level, so it will be interesting to see how close these toys end up being in production to the official toys. Also the winner gets a 50″ Android balloon.

But back to the mixtape: you can grab the mixtape for your own for free by clicking this link, and have a super fun time listening to the raps and the rocks: [ZIP file]

EDIT: On the other hand, it does appear that DJ Skee has worked with Snoop Dogg in the past – take a peek at this video to see: