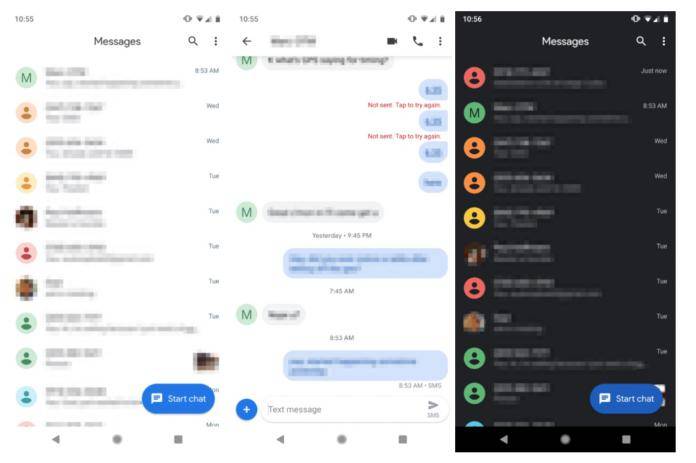 Google seems to be going back and forth about the update for their Android Messages app. A week or so ago they rolled out a Material Design UI update and more importantly for some, it also came with a dark mode. However just a day or two after the update was released, it looks like they changed their mind and users suddenly found themselves with the previous dark blue themed app. Now, a new version of the app is bringing back those two once again and hopefully this time it’s for good.

The Material Theme UI for Android Messages used a stark white background for the app, instead of the dark blue theme that you could see in the app bar. There were still hints of blue in the floating action button “Start chat” which replaced the + FAB button before. The word “Messages” is centered in the app bar that is now white instead of blue. It had a much cleaner look and so a lot of users liked it when it first rolled out in version 3.5.

For those who found the stark white too bright, they also brought the dark mode, which is a pretty popular design option now for a lot of apps. Basically it just turned your background into dark gray and your text box and message backgrounds into light gray. It lessened the strain on the eyes and when you’re reading your messages in the dark, it’s less “scandalous”.

Version 3.5.052 is starting to roll out and it looks like both features are back on board. Once you’ve updated your app, you need to close it from your recents menu and then restart it and see if the changes have been applied. Some people had to repeat the process a couple of times but eventually Material Design and dark mode showed up.

However, Google might change its mind again and take it back either because they found some bugs or they still wanted to refine something. Either way, enjoy it while you can.